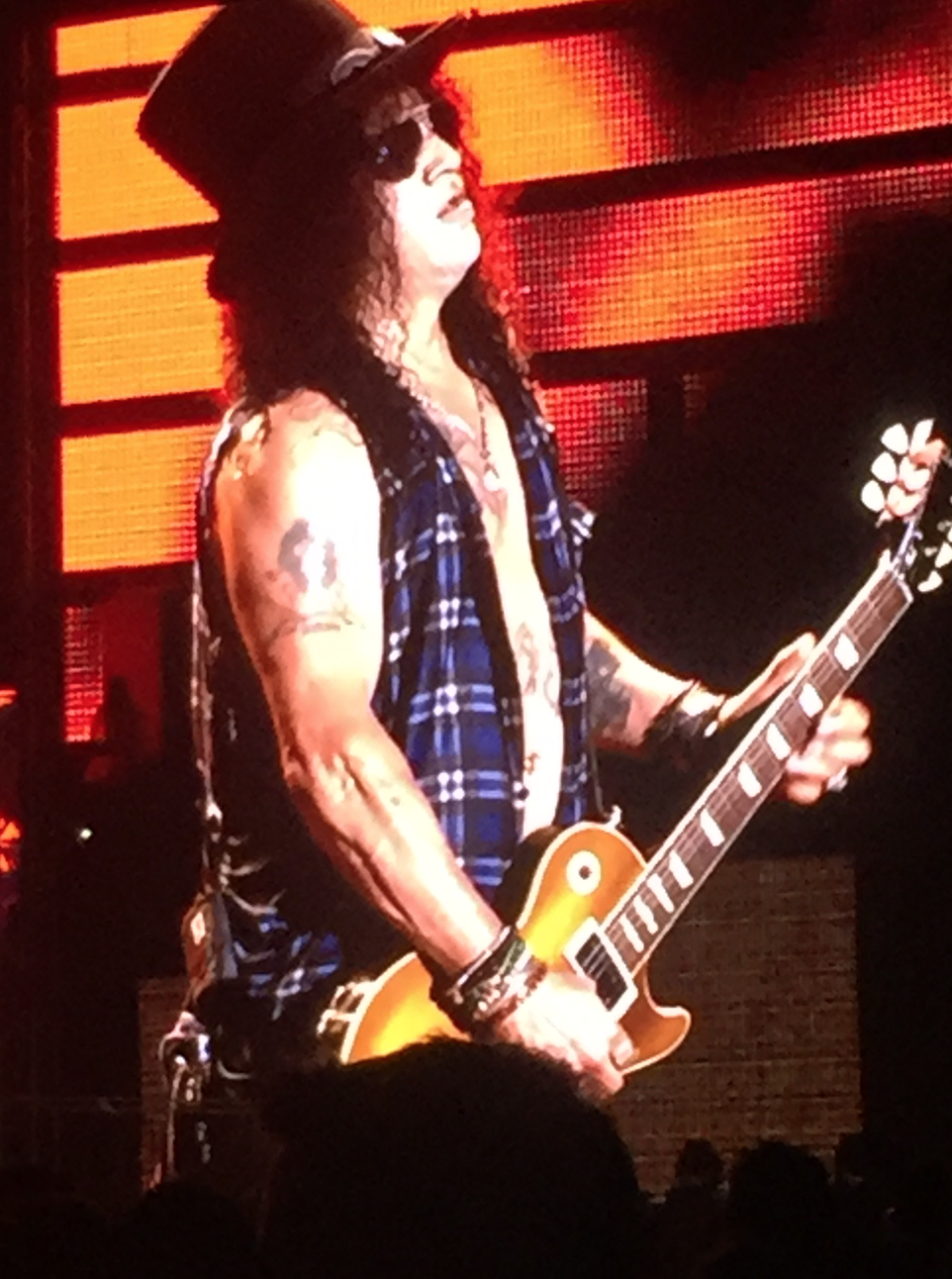 Hey, I wrote a music review! It’s been way too long since I’ve written anything longer than a FB status. Hopefully this is the beginning of good things. My review got good reviews so enjoy it here…

Ok, that’s enough “official concert review lingo.” I am not a journalist and my iTunes catalog may or may not include Debbie Gibson, Milli Vanilli and the Pointer Sisters.

I came to Yarkon Park to sweat, to have fun and to get in touch with my inner nice-Jewish-boy 15-year-old self, who unknowingly sang along to heroin-inspired lyrics. Not heroine, as in Hannah Senesh. Heroin, as in “Mr. Brownstone.” And if you thought you’d read the name “Hannah Senesh” in a GnR concert review, please call to collect your prize.

The band’s current tour is called “Not in this lifetime,” named for the answer Axl Rose gave in 2012 when asked if the original band would ever reunite. But there they were: Axl, legendary guitar player Slash, bass player Duff McKagan and some other people who did absolutely nothing wrong all night. 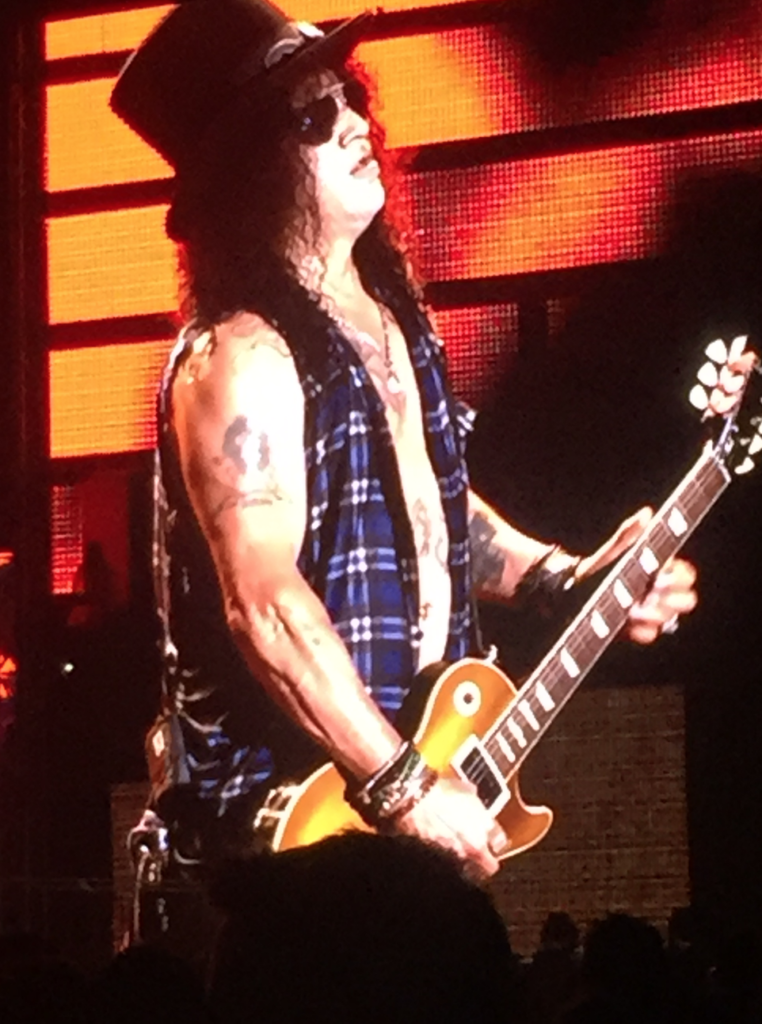 Earlier this week, it was reported that the show would start a hour earlier than planned, making it 3.5 hours long instead of 2.5. Considering you can easily go on Youtube and watch other shows from the current tour which all clock in at right around three hours, I find it hard to believe that the show length was unknown until this week. Was this some ploy to get Shabbat-observant fans to buy tickets, expecting to see most of the show before this week’s announcement? I don’t know, but it stank for them, because at 8 p.m. on the dot, the show began.

The band burst onto the stage with force, playing “It’s So Easy,” the first of many songs played from Appetite for Destruction. I can only assume tens of thousands of people were doing havdala because once it got dark, I smelled some seriously fragrant spices. Borei minei b’samim, indeed.

Axl came out in ripped jeans, a black Harley Davidson T-shirt and a blue flannel shirt tied around his waist, and he would change his T-shirt (and flannel) several times, which is par for the course during the Tel Aviv summer. Since his famous MTV days, he has put on a few pounds, lost some hair and has a few more lines around his eyes. Wait, are we talking about him or me?

As for Slash, he wore blue jeans, an unbuttoned, sleeveless blue flannel, sunglasses, and his classic top hat. I mean, seriously, if that guy aged, would we even know? All we ever see is a bare chest, a hat, and possibly the most famous Jewfro ever. There’s a distinct possibility that he’s been frozen since 1988 and I’m not sure anyone can prove otherwise, at least not without getting El Al security involved.

For three solid hours, they played almost every song anyone would have wanted, plus a lot more. There were several songs unknown to the masses, most of which came from their 2008 album Chinese Democracy, but the band never lost the crowd due to their high energy and camera close-ups on Slash’s magic fingers while he was doing his guitar thing.

The crowd was pretty young, considering Appetite came out, to give some context, when Wonder Woman’s Gal Gadot was just two years old. Of the older fans, there was more body art than in the average Tel Aviv crowd, so much so that by the end of the concert, I unknowingly had grown a dragon tattoo on my back. From where I sat, some of the peaks in crowd energy and singing were during “Civil War” (from the Use Your Illusion album), “Paradise City,” “Knocking on Heaven’s Door,” “Welcome to the Jungle” and most of all, in the opening chords of “Sweet Child O’ Mine.”

Like most of the biggest concerts here, the dialogue was minimal. During “Welcome to the Jungle,” Rose added “Tel Aviv!” before “I want to hear you scream!” and after “You’re in the jungle!”

And then there was the classic line, “YOU KNOW WHERE YOU AAAAAAARE?????” Of course we do, we all use Waze.

Between the recognizable and less recognizable songs, mostly from 1987-1991, they played instrumental versions of Pink Floyd’s “Wish You Were Here” and the closing of Derek and the Dominos’ “Layla,” the theme to The Godfather, “Black Hole Sun” (in memory of the late Chris Cornell of Soundgarden), AC/DC’s “Whole Lotta Rosie” and The Who’s “The Seeker.”

After numerous glitches with the equipment during the recent Aerosmith concert, the only problem I noticed all night was the failure to put the camera on Slash during any of the “November Rain” guitar solos. That was not the time to focus on Axl’s piano playing. I suspect the camera guy took an impromptu coffee break and demand an independent investigator.

The final pre-encore song was the fastpaced “Nightrain” which saw Axl strut and move around as much as during any song, and before saying goodnight, they finished with the ballads “Sorry,” “Don’t Cry,” “The Seeker,” “Paradise City,” and “Yerushalayim Shel Zahav.” One of those is a lie.

With the crowd on their feet during “Paradise,” Slash played the guitar behind his head, Axl Rose ran from one end of the stage to the other, and fireworks went off on the sides of the stage, bringing the show to a close.

A huge “kol hakavod” (good job) to Guns N’ Roses. Every single big-name concert I’ve seen in Yarkon Park has felt the same. A 9 p.m. or 9:15 p.m. start time and an 11 p.m. finish to avoid breaking the municipal laws. Aerosmith, Madonna, the Rolling Stones, Bon Jovi – these bands are way too big to fit decades of hits into a measly hour and 45 minutes.

When I texted my friend Lee in the States at the beginning of the show, he responded, “I wonder if they’re still good.”

Trust me: on behalf of 60,000 people, you don’t perform for three hours without a break if you’re not still good. From Axl hitting the high notes to Slash being a badass rock star, and Duff McKagan adding “toda raba” to the end of his one turn on vocals, the consensus was that for one night, Guns N’ Roses turned the overheated park in Tel Aviv into a bonafide jungle.