It’s almost time to take the first of my two eleven-hour flights, what better reason to blog on my new site? While it rarely happens anymore, it’s more fun than spending another thirty minutes deliberating about how many sweaters to pack and which books to bring. Let’s do a little Q&A.

Why are you packing sweaters?

Because it’s cold in Australia.

Yes, but you live in Tel Aviv, where it’s getting close to three-showers-a-day weather.

I know, it’s disgusting. But I was lucky enough to be invited to Limmud Oz.

Cool! You keep talking about those Limmud things. That’s like TED talks for Jews?

That’s a pretty bad comparison but I guess so. The original Limmud is this amazing week in England with hundreds of speakers talking to thousands of participants on all kinds of topics. Thirty-something years later, there are now local versions in cities around the world and I’m going to the one in Australia (or Oz, as they call it).

And nice that you get to miss all the humidity!

In Celsius, I mean. Not terrible.

What’s Celsius?……Anyway, so how long are you going for?

The conference in Melbourne is for three days and Sydney is having their Yom Limmud for one day. I’ll be doing a few programs at each with a few other events as well. Everyone has told me that you can’t visit for less than A MINIMUM of two weeks so I decided to channel my inner Israeli and spend a month abroad. This is my longest trip ever. Really crazy. What might even be crazier is that, on the way there, I’m stopping in New Zealand for four days to do a mini-Limmud event in Auckland.

New Zealand is part of Australia, no?

I think it’s like their Canada or something. Any other questions?

Why did you shave?

Because I didn’t want to shlep my clippers. And I can never remember how voltage and all that stuff works. 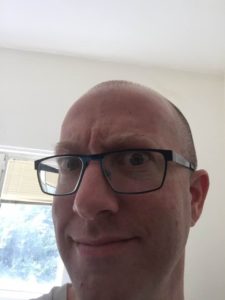 Hasn’t your friend explained that to you like a thousand times?

Are you going to try vegemite?

What is vegemite anyway?

Are you going to post pictures along the way?

Oh yeah, I’m sure. Hopefully I’ll unplug a little, always a challenge, although maybe my homemade Facebook message will help.

This head is not drawn to scale.

Don’t you need to go and call your mom before you take off?

You don’t find it weird that you are trying to get in the last word with yourself?