More than 50 years into their historic career, the Rolling Stones are in Israel and preparing for their concert tomorrow night in Tel Aviv’s Park Hayarkon!

Without further ado…..my latest piece in the Times of Israel…. 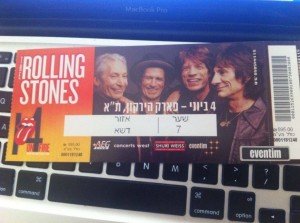 In a much anticipated move designed to curry favor with the Israeli middle class, Finance Minister Yair Lapid announced on Tuesday sweeping economic reforms that will allow citizens to afford Rolling Stones tickets.

Lapid said, “I was elected on the platform of “Yesh Atid”, that there is a future, and I still believe that this is true. Except for Keith Richards. His liver belongs in a plate of Jerusalem Mix.”

The darling of the 2013 elections, Lapid pledged to remedy Israel’s high cost of living and real estate prices but has had difficulty thus far achieving his goals. Lapid was recently named the least popular minister in Israel, the equivalent of being the least fried member of the Rolling Stones.

With the government coalition already close to its breaking point, Jewish Home leader Naftali Bennett said this was the wrong move before calling for Lapid to lower ticket prices to the Backstreet Boys, which then sent his own approval ratings plummeting.

It was thought this move might also bring Lapid closer to the Haredi population he has been targeting for reform. No one was more happy than Shas leader Aryeh Deri who revealed that no less than 30,000 Haredim were expected to attend the concert, especially since they wouldn’t need to get up and work the next day.

Added Lapid: “The Rolling Stones are the perfect band to visit Israel. They helped pioneer the “rock and roll” attitude of the 1960s which is not so different from our values of innovation and chutzpah here. The song “Satisfaction” especially rings true, representing the Israeli public’s total lack of it in my job performance. And much like me, Mick Jagger knows nothing about the Israeli economy.”

Ironically, even after the price reduction, it was unclear whether anyone would be able to afford tickets after spending half their monthly income on cottage cheese for Shavuot.

In one of his final press conferences as outgoing President, Israeli leader Shimon Peres said, “I couldn’t be happier to finally see these great music legends come to Israel. I can’t wait to see what these young men do next.”