The REAL Live-Blogging of the Pope in Israel

Hey, did you hear?  The Pope was in Israel.  Fortunately I don’t live in Jerusalem so my schedule (and ability to get around) wasn’t affected.  I accidentally ended up live-blogging the thing on Facebook and the Times of Israel.  Enjoy…

4:20 PM Pope Francis has boarded his flight to Ben-Gurion airport and is looking forward to seeing the familiar sites from his last visit to Jerusalem years ago. After changing money at the Kent stand in Zion Square, the Pope plans to eat dinner at Bonkers Bagels before dancing the night away in the Underground.

3:42PM Pope Francis is wrapping up his stay in Bethlehem with a visit to the Grotto of the Nativity where, according to Christian tradition, Jesus was born. Francis will then fly by helicopter to Ben Gurion International Airport for his reception by Israeli officials where, according to Jewish tradition, people go on strike.

3:34 PM Presidents Peres and Abbas have confirmed they will meet Pope Francis at the Vatican next month for a peace summit. Upon receiving the news, Prime Minister Netanyahu was overheard asking Peres to bring back 247 gallons of low-fat raspberry gelato.

3:17 PM In an exclusive interview with Times of Israel editor David Horovitz, Zoe Barnes of the Washington Herald reveals that Vice Pope Frank Underwood told her he’d be Pope by Tuesday.

2:40 PM The Pope tells Channel 14 news that he is sad to not have time to visit the Sea of Galilee where Jesus of Nazareth walked on water and Jason of Birthright binged on shrooms.

2:22 PM The Pope tells President Mahmoud Abbas that the movie version of “Angels and Demons” was totally unrealistic and flat-out sucked.

2:12 PM With the Pope’s arrival just hours away, Jerusalem residents deny claims that they asked Pope to bring sunscreen and Skippy peanut butter from Target.

2:00 PM BREAKING NEWS: Hadassah Hospital reports that the Pope has been afflicted by Jerusalem Syndrome, thinks he’s the Pope.

1:45 PM After the Muslim call to prayer in Bethlehem interrupted the Pope’s mass, the Arabic calls of “God is Great” were met with Christian cheers of “Viva Il Papa”. Channel 7 reports a yell from the nearby Jewish neighborhoods resembling “ya’ala Maccabi.”

1:01 PM In response to the Pope’s visit, BDS-supporters have announced that they are boycotting all Catholic churches and Chef Boyardee. 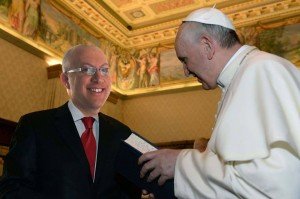 Of course it’s real, why do you ask?

11:34 AM Can anyone recommend a good Italian restaurant in the Christian Quarter? Asking for a friend.

11:12 AM Only a few hours till the Pope flies from Bethlehem to Ben-Gurion airport. Do you think security will ask him the purpose of his visit?

10:31 AM The Pope’s trip in Israel is lasting two days or the same time as spinach I buy from every grocery store in this country. Come on, Start-Up Nation, fix this, please. (Been waiting for the right time to kvetch about my spinach going bad.)

10:04 AM The Times of Israel reports masses of people of all ages gathering in Bethlehem to meet Pope. Eyal Golan disappointed when realizing they said “THRONGS”.

9:43 AM Channel 1 reporting that Pope’s visit will bring “hellish gridlock” to the roads of Jerusalem. Agrippas expected to remain totally normal.

8:04 AM Public service announcement: please do not refer to the Pope as “His Holy Gever”.

7:45 AM Channel 2 is reporting that the Pope has decided to add a second show in Israel. Suck it, BDS.

Up next?  Justin Timberlake!