For those of you who grew up at Jewish summer camp (and even those who didn’t), you may enjoy this.  Many of us know the tsofim (Israeli scouts), the Israeli teenagers who came to camp to represent Israel and inject the summer experience with ruach and a small taste of Israel.  But how many of you know the friendship caravan, the song and dance troupe of tsofim who toured North America, putting on fun and musical shows for camps, churches, nursing homes, and more? 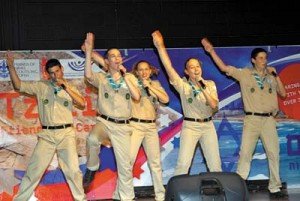 Kind of like The Beatles on “The Ed Sullivan Show”, just with more khaki.

When I was at camp, this was an annual highlight (mostly because we were nerds).  The tsofim and the caravan were great ambassadors for Israel and we loved them for being the best people Israel had to offer.  (Side note:  I remember working at the Israeli consulate in Atlanta 10 years ago, having an argument with the Consul General as to whether or not Israelis were smarter and nicer people than everyone else.  He told me, “Benji, not all Israelis are the ones you meet working at summer camp.”  Of course I didn’t believe him.  Silly me.  Shabash, you were right.)

Anyway, a couple of months ago, the tsofim celebrated 40 years of the caravan with a big event at Park Hayarkon (the hardest thing for me to say in Hebrew….too many reshes.  Pahhhhhrrrk……Hayaaahhhhrrrrrrkon.)  There were several hundred people there spanning all decades, from this past summer all the way back to the first caravan ever in the early 1970s.

Through a couple of friends from the tsofim, I was invited to perform a few minutes of stand-up (in English) about their meaningful, shared experience.  It was a blast.  This was actually the biggest audience I had ever performed for; you can tell from the audio how many people are there and how far they are from me (it was in an amphitheater.)  If you turn up the audio, you can hear some big laughs.  They were dying.  I’ll probably never do most of these jokes again but it was worth it.