ONE MORE TIME! 65 More Things I Love About Israel

Posted at 11:36am on Apr 4, 2013 in Benji's Getting Serious, Comedy, Culture, Current Events, I Love Hebrew, I Love This Place, Jew Stuff, Life on the Home Front, The War Zone, This Aliyah Moment is Brought to You by the Letter Aleph, Video by Benji Lovitt 0 Comments

As Yom Hazikaron turns into Yom Ha’atzmaut, I find myself right between my two favorite days of the year in Israel.  I don’t have much new to say about this special time of year.  I can tell you that after being abroad last year, I think I’ll find it extra special this time.

I wasn’t sure if I’d still be writing this list one year ago but after watching it blow up on the Times of Israel, I knew I had at least one more in me.  It scares me to think that this has an expiration date, that I won’t be able to continue forever, so I’m enjoying it as much as I can right now.  This list (the brainstorming, writing, editing, running it by my a couple of my amazing friends, and doing this process again and again) is probably the highlight of my year.  I hope you enjoy.

Without further ado, as seen here on the Times of Israel, I present to you 65 MORE things I love about Israel.

64 More Things I Love About Israel

63 More Things I Love About Israel

62 More Things I Love About Israel

61 More Things I Love About Israel

60 Things I Love About Israel

1.  I love that 45 minutes is considered a long drive in this tiny country but that people will drive three hours to Acco to eat at Chumus Said.

2.  I love Tel Aviv babes riding scooters. Chicks-on-bikes: like disk-on-key but with skirts.

3.  I love that the Neot Kdumim Biblical Reserve teaches team-building and leadership via shepherding goats and sheep.

4.  I love Cups-Unlimited Coffee, the app which allows me to drink as much Tel Aviv coffee as I want for just 169 shekels a month. However much money the government is taxing me, I’m getting it back tenfold in café hafuch.

5.  I love the genuine interest in your well-being expressed upon meeting a friend.

6.  I love that even the urinals are religious. 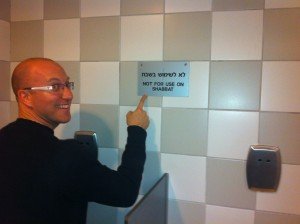 7.  I love how it’s totally acceptable to wear your 1995 Camp Young Judaea staff sweatshirt in public and nobody thinks you look like a total dork.

8.  I love that after a stand-up comedy show, an audience member told me “yashar koach”.  If only every dvar Torah had a two-drink minimum.

9.  I love that you can conduct a multi-million dollar business deal at Café Aroma wearing Crocs.

11.  I love that I can choose to adopt the Sephardic customs on Pesach and not feel the least bit guilty.  Olim mentality:  “We moved halfway across the world and give our tax dollars go to the Jewish people.  WE’LL EAT RICE AND WE’LL LIKE IT, DAMMIT!!!!”

12.  I love that Israelis are unaware of how hot they are to Diaspora Jews because everything is relative.   It’s like how Superman had special powers on Earth but was normal on Krypton.  If the average Israeli woman went to a Jewish singles event in New York, forty accountants would go home with whiplash.

13.  I love ptitim, the rice-like grain that David Ben-Gurion asked the founder of Osem to create in order to feed Mizrachi olim during the early days of the state. Give it up for the DBG. The dude founded a nation and still found time to invent pasta.

14.  I love how in “Mission: Impossible, the subtitles called Tom Cruise’s character Ethan “Eitan”.  What did they his character in “Jerry Maguire”?  Giora?

15.  I love that you can find delicious chumus even at the airport.  Who needs a sleeping pill?  Plus, the cashier could have vomited in it and it would still have been better than Trader Joe’s.

16.  I love that my old landlady called me to ask me to bring her perfume from the States and it wasn’t the least bit weird.

17.  I love that the environmentally conscious Soda Stream, which became the first Israeli company to advertise during the Super Bowl, claimed they could have saved 500 million bottles from being used on game day alone. Just for the waste of it…Diet Coke.

18.  I love how Google Translate translates LOL as “חחח”.

20.  I love the energy on Tel Aviv’s monit sheirut on a Thursday night.   It’s a party on wheels.

21.  I love how the top of the Israeli male head has perfectly evolved to support a pair of sunglasses for hours on end.  With just a small flick of the wrist, Shlomo from Dimona turns into Bono.

22.  I love that because of Israel’s casual dress code, I iron about as frequently as I levitate.

23.  I love that Nutella’s Pesach advertisement featured the Azrieli Towers made from matza. 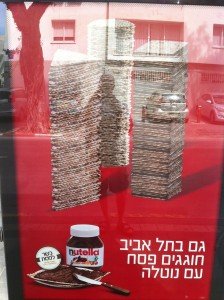 24.  I love that the air raid sirens in Tel Aviv lead to social gatherings in the stairwell.

“Boker tov, ma nishma?  Yuvali is bigger every time I see him.  I mean, I know I saw him yesterday during the last siren but he’s definitely not smaller.”

25.  I love rashei tayvot, the abbrevations that permeate everyday language formed by combining two words.  Shnatz (nap), sakash (sleeping bag), kastach (covering your ass).  Can you imagine if we did that with English?  It would be fuckawes.

26.  I love that a stranger in a café told me to watch her baby while she went to the bathroom.  That will happen in America when Carly Rae Jepsen and Shmuley Boteach make a Harlem Shake video.

27.  I love staffing a Birthright trip and experiencing this country through the eyes of first-timers.  Super, super-rewarding.  (It’s not too late to come back with Masa, you guys.  Can you believe I’m not getting paid for this?)

28.  I love that when Geshempocalypse brought our biggest storm in decades, these guys went tubing down the Ayalon River.  Do we love rain or what? 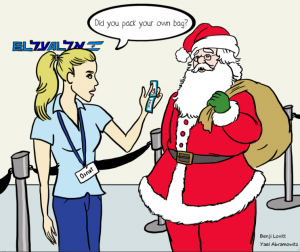 30.  I love the gesture of pulling down your eyelid to express snarky disbelief as if to say, “Really???”  I like to use multiple fingers to add levels.  “Let me get this straight.  Bar Refaeli not only entered her phone number into your cell at Dizzy Frishdon but also offered to pay your arnona until 2015?  That’s a five-finger eyepull, achi.”

32.  I love taking the #18 bus towards the beach just to hear the recorded female voice say this…

33.  I love the big, strong Israeli gever gevers who turn into Baryshnikovs when doing Israeli folk dancing.  Nothing goes with a fireball tattoo like the Yemenite step.  (Actually, it’s givrei gever.  Smichut.)

34.  I love that when the local construction worker changed into his work uniform, he put on a different skullcap with paint chips and dirt on it.  That’s right-the dude had a “work kippa”.

35.  I love that Jerusalem has this “old Jewish man crossing” sign. 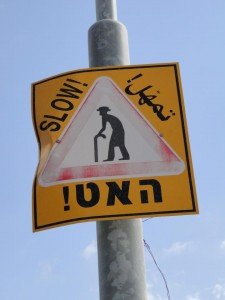 36.  I love that “pigs in a blanket” are called Moshe B’teva.  Hot dog in bread coating……the man who delivered the Jews from bondage……yeah, that’s about right.

37.  I love that magical word which quickly wraps up every phone conversation here. Phone call in America:

Caitlin:  “Good talking to you.”

Caitlin:  “Let’s do this again soon.”

Jaden:  “Totally, you take care of yourself, allright?”

Caitlin:  “You hang up first.”

38.  I love the hard-to-translate “balagan” (chaos).  I picture farm animals breaking down the barn doors as clowns with noisemakers run amok.

39.  I love when “ya’ala” and “balagan” get together.  “YA’ALA BALAGAN! (LET’S PARTY!)”  I picture arsim breaking down the barn doors and slam-dancing to Infected Mushroom.

40.  I love when my friends come visit from abroad and make me feel good about my foreign language skills.  “Benji, your Hebrew is so good!”  “Really?  I ordered water.”

42.  I love that in less time than it takes to say “Florida voter fraud”, you can stand in line, vote in a national election, and cook a seven-layer pashtida.

43.  I love that when it snows, the snowmen smoke nargila and drink arak.  That’s funny, I didn’t know snowmen went on Birthright. 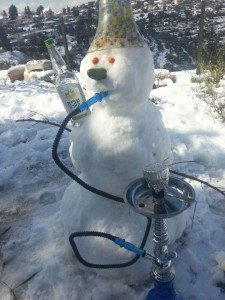 44.  I love that the three finalists on Master Chef were an ultra-Orthodox Jewish woman, a German oleh, and an Arab-Israeli.  How do you say diversity in Hebrew?  And in German?  And in Arabic?

45.  I love that even if an office fridge is empty, it will still have five cartons of milk.  #mustbethecoffee

46.  I love that our money is so colorful.  It’s like Rainbow Brite threw up in my wallet.

47.  I love that you can ask a girl out three nights in a row after meeting her without worrying about her filing a restraining order against you. Relationships progress quickly here.  “It’s Tuesday, let’s move in together.”

48.  I love how my friend Jane nicknamed her fetus “Chumus”.   When he was born, they called him Eitan.  Sellouts.  (If you’re keeping score at home, after six years of lists, chumus references: 19; coffee: 25)

49.  I love that when I travel abroad and meet Israelis, we hit it off in 2.7 seconds.  Family is family wherever you are.

50.  I love that Agvania on Ibn Gvirol in Tel Aviv has a set of the kabbalistic Zohar books displayed in their store.  Now that’s what I call mystic pizza. 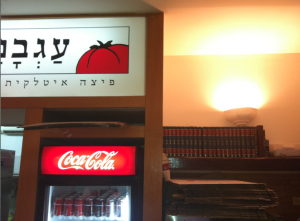 52.  I love that my friend’s Arabic professor taught her how to conjugate the verb “write” to the tune of “Hava Nagila”.

53.  I love that Guns and Roses played Hatikva before going into “Don’t Cry”.  It almost makes up for the absence of Slash.

54.  I love that my friend signed up for paperless billing from the electric company and received a certificate that a tree had been planted in his honor.

55.  I love that even when the news is frustrating, the minute Bibi speaks at the UN, there are 45,000 memes within five minutes.

56.  I love that during Operation Pillar of Defense, a group of local and international students at the IDC-Herzliya created a cheder matzav (“war room”), running an online hasbara effort on Facebook in over 30 languages, reaching millions of people around the world.

57.  I love that Israel finally opened its first legit Mexican restaurant.  After sixty-five years, we have our first reason not to eat chumus.

58.  On that note, I love that the list of things we can’t get here is getting scarily shorter.  C’MON, TARGET, LET’S DO THIS ALREADY!!!!

59.  I love the ubiquitous flags that appear almost overnight the week before Yom Ha’atzmaut.  Between that and the weather, this is the best time of year.

60.  I love that when my ten-year old neighbor practices the same squeaky song every day on his saxophone, it’s “Hatikva”.

61.  I love that people of all ages make adorable welcome signs to greet friends and family making aliyah.  You only come home once. 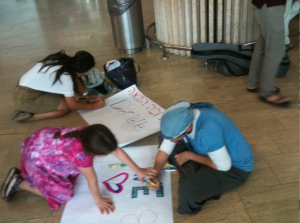 62.  I love that anyone can get a Jewish education for free.  For the same price that it costs to educate a six-year old in a Manhattan Jewish day school, you could feed all of Israel after absorbing the entire world’s Jewish population using a matrilineal definition.

63.  I love that whereas I used to say “WHOA!” when olim vatikim would tell me how long they’d been in Israel, I now elicit “WHOA!”s from others.  Seven years, you’re just around the corner….

64.  I love that despite having gone through periods that are challenging, emotionally difficult, or to be completely honest, sometimes just not good (because, hey, aliyah ain’t a bed of roses), nothing I ever experienced in the US has held a candle to the incredible meaning I have found in my life here.  Having a platform to share my perspectives on this magical country with friends and readers from around the world is something I never could have dreamed up.  People should live where they want but there is NOTHING like living in Israel.

65.  I love that I’ve had this once-in-a-lifetime experience and that it’s not over yet.