What Happens When Santa Claus Comes to the Middle East

‘Twas the night before Christmas

And all through the house…

Not a creature was stirring….

Except for people dancing to heavy bass thumping in a Tel Aviv dance club.

Thanks to a little WordPress glitch, I didn’t get to write a few days ago but better late than never, right?

So here’s something fun and different.  Last week, a silly little idea popped into my head.  I called my talented friend Yosef Adest, video producer and photographer extraordinaire, to see if he would PhotoShop my idea into existence.  Upon hearing it, he said, “you need an illustrator.”  He referred me to his friend Yael Abramowitz, we had a three minute conversation, and within an hour or so, the graphic below was born.

It’s hard for me to believe that something so spontaneous could spread so virally but I’m pretty sure that if this wasn’t the most viral thing I’ve ever done, it was #2, with what must have been several thousand shares on Facebook.  (What the heck, El Al?  Would it have killed you to post it?) 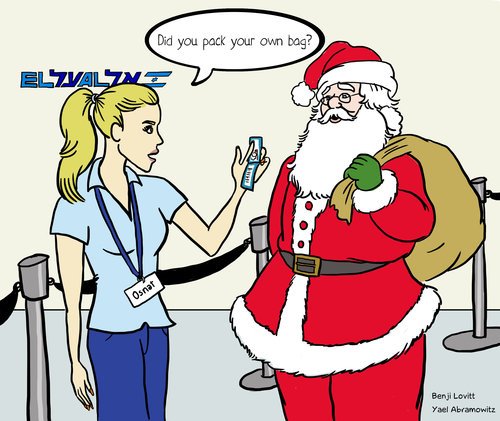