“War! What Is It Good For? Writin’ On Your Facebook….”

Posted at 1:51am on Nov 11, 2012 in Benji's Getting Serious, Comedy, Current Events, Life on the Home Front, The War Zone, This Aliyah Moment is Brought to You by the Letter Aleph by Benji Lovitt 0 Comments

With apologies to Edwin Star….

So as always, I had a tough time sitting down to write this past week.  As I have said in recent years, the ease of writing a quick Facebook status seems like the biggest obstacle to long-form expression.  For better or worse.

There is no way to write down everything I felt this week but I do feel compelled to compose something, so here are some thoughts in no particular order:

As I wrote on Facebook on Friday, the 16th,

“It is a constant struggle to let the world know when we ARE under attack while also letting them know when we are NOT (that is, how it is safe to come and that the entire nation is not up in flames). So to friends and family, yes, I was awoken twice through the night. But mostly because I had to pee.”

That was one of the first things I posted upon returning home from the States and sort of set the tone for the week.  Serious but also infused with some humor.  (And, no, I don’t need to see the doctor.  This only happens after a long international flight for some reason.)

And that one just reveals the big paradox.  On one hand, this country and its citizens are in a constant fight to let the world know that we are under attack while simultaneously running tourism campaigns and fighting the image that this place in its entirety is a war zone.  “Hey, world!  We are under attack!  But Mom!  I’m fine!”  After the Tel Aviv bus bombing, I sent an email to my family and relatives, letting them know that everything was ok, knowing full well that some of them probably wouldn’t believe me (because they haven’t been here).  “I’m fine….I promise….it’s not like it looks on tv…..”, etc etc etc.

And I was fine.  I won’t spend too many words on the thoughts I continue to try to process after six years in Israel but it all goes back to that first Yom Hazikaron, when I realized the chasm between the country, in a national state of solemnity, and me, realizing that I was totally unable to relate, as much as I wanted to.  I always hate to tempt fate or wish for something bad to happen but I continue to feel that until I, G-d forbid, experience one of those “I was supposed to be on that bus” moments or, G-d forbid, something happens to someone I know, I feel like I’m not going to get it.  “It” being the national pain that you feel when you are Israeli.  And this is another big paradox.  I would be sick in the head to want this but I know that, just like I didn’t go through the army or even fraternity rush, until I “pay my dues”, I’m not going to feel Israeli.

I came here at the tail end of the 2nd Lebanon War, I was here during Cast Lead, and now this.  None of them to me really count as “it”.  Casually walking from my couch to the stairwell four times when I had absolutely no fear that an errant missile was going to hit anywhere close to Central Tel Aviv did nothing to accelerate my heart rate.  If I had been in the South?  Surely it would have been different.  I spent a lot of time thinking and discussing different peoples’ emotional reactions this week and I’m not going to do it here.  That’s just how I felt.

“Anyone in Southern Israel need refuge this weekend? Let me know if you need a place to crash. Especially if you are female, single, and between the ages of 29 and 37.

Mazal tov to me on my most popular status of all time with 193 likes between my personal profile and page (see my page here).  Because really, what matters more than Facebook likes?  And this was the biggest paradox of the week for me.  How do you reconcile your country being at war with the fact that your creative juices are flowing, your friends are “liking”, and people are telling you that you must continue to distract them from the news?  Look, we all know that Facebook is the biggest and worst distraction in our lives, a guilty and maddening pleasure.  Is it news to anybody here that I spend a lot of time there trying to come up with witty statuses to make people laugh?  Well, I may not have ever posted so much in a week and I certainly never got so much positive feedback.  How can you not get a rush from that?   I’m not so narcissistic and selfish to want this stupid conflict to continue just to “keep the fun going” but, yes, I did enjoy feeling especially creative during those days and having people tell me how meaningful it was for them.  Maybe I didn’t house a refugee or get called up to defend the border but this felt like my small (maybe very small) way of doing my part here.  So yeah…..I feel guilty for having derived any pleasure from this past week but I did.  I’m a little afraid to try to draw any conclusions from that. 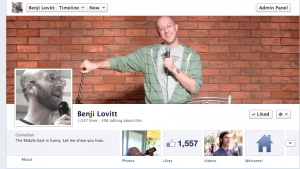 Within an hour or two of the bus bombing, a couple of my friend were being more light-hearted and jokey than I found appropriate.  My friend Dave asked, “So where’s the line?  You’ll joke about missiles but not bus bombings?”

I don’t know.  Something was different to me.  Maybe because the bombing took things to a different level.  Back to a place that nobody thought we’d return to.  Because suddenly the war had stepped foot in Tel Aviv.  Because lives were suddenly much more at risk than they were when a few crappy missiles were getting past Iron Dome to land in a field.   Is my line in the wrong place?  Do people in Southern Israel think I crossed it a long time ago?  I don’t know.  And to tie it back to what I said earlier about the dissonance between the conflict and my sense of humor, I found myself thinking several times this week that if you (people abroad) want to know when things have gotten much worse, it’s when the joking stops.

“Allright, let’s just get this out in the open: nobody’s getting anything done these days, are they?”/“Still haven’t had time to write a blog post. But after a range of emotions today, I will only say for the 479th time that I cannot imagine having lived here during the second intifada. I have no idea how ANYONE got ANYTHING done EVER.”

Those two go hand in hand.  I got several responses to the second from people who were here ten years ago and the most insightful one reminded us that Facebook didn’t exist.  I guess check-ins (“I’m ok!) would have been easier but it surely would have made productivity even more difficult.  (For any readers who aren’t heavy Facebook users, I’ll just quickly say that most people spent the week posting news articles, op-eds, videos, their feelings, or anything else related to the war.  It was quite distracting.)  My friend Harry said that there was a lot of compartmentalization going on during the intifada.  I guess there must have been.  I can’t imagine.

Too much to say in a FB status so I’ll just leave it at this:  The Arab-Israeli conflict: Driving people to drink since…too *&^*ing long ago. 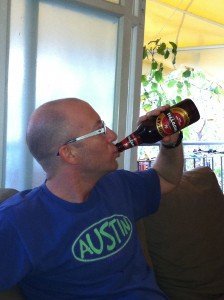 Because sometimes, what else is there to say?

Ok, this is a weird one which I surely won’t be able to express well in writing, especially since I couldn’t even figure it out in discussion this week.  After I checked in post-bus bombing, one friend responded with the first comment above.  In case you’re a newcomer to this here blog, I started it the day before I made aliyah at the end of Lebanon II (the sequel is never as good as the first).  I called it “What War Zone???” to show people that this place wasn’t exactly the conflict-tattered place that people thought it to be.  Over the years, the people who would warn me to stay safe were often the ones whose visions of Israel were most disconnected from reality.  I would find myself getting defensive, wanting to answer them with some talking point that “anything can happen anywhere and that I feel more safe in Israel than blah blah blah.”  Or even more ridiculously with, “NO!  YOU STAY SAFE!”  Both of these would probably make me look like a mental patient.

But I just don’t enjoy reinforcing people’s worries that this place is, you know, a war zone.  Yes, I know I think about this more than I should but, hey, nobody said being a die-hard, grass-roots volunteer for Israel’s Ministry of Tourism was easy.  I also don’t love the idea that every time something happens (especially if, G-d forbid, things get crazy here), everybody has to check in immediately or people will lose their minds worrying.  Why can’t the default be that, don’t worry, everything is fine unless you hear otherwise?  In response to the “keep the frequent updates coming” comment, I crafted the following response.

“Your support is very thoughtful.  But please assume everything is ok.  If I am NOT, I will let you know.”

Of course, my friend Dave made me realize that if my arm is hanging by a thread (or worse), I may not be able to let people know.  We spent about 45 seconds laughing at my illogical response before I realized I should probably just respond with “thank you for your support.”

I’ve been meaning to channel my inner Onion/Andy Borowitz for some time now.  I’m guessing you’re going to like this one. Because who doesn’t need to laugh in times like these?

Did you see this one?  I was pretty pleased with it (I wrote it in about 20 minutes on my flight home from the US) but I didn’t get much feedback at all.  Too soon?  Too much a reminder of Middle East violence?  This humor thing is complicated.

Can we all agree to retire the hummus/Hamas wordplay forever?  It was already old when Bruno did it.  If anyone actually does succeed in turning Hamas into hummus, please let me know.

We now return you to your regularly scheduled Facebook feed.

This one came from my friend Shai (and many others).  Back to normal life.  Just another week in Israel.

And this brings my coverage of Operation Pillar of Defense to an end.  I hope my updates helped make this past week just a little more bearable.  If they did, why don’t you pass my name along to anyone in Israel or the English-speaking world so I might coordinate a comedy show on an upcoming visit?  Because now more than ever, we need to be able to laugh.  Now let’s all hope for quiet.