Posted at 6:33am on Aug 8, 2012 in Benji's Getting Serious, I Love This Place, This Aliyah Moment is Brought to You by the Letter Aleph by Benji 0 Comments

Well, it’s that time of year.  Six years ago, this past Friday, I did the craziest thing I’ve ever done.  That’s right!  I deleted my Friendster profile in a drunken fury.  Ok, so I made aliyah. 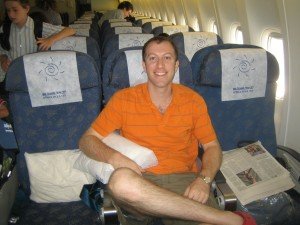 That schmuck has no idea what he’s getting himself into.

From the men who brought you “Die Hard” and “How Faigy Got Her Groove Back”, I present to you my fifth annual aliyah blog post.  (I missed the first year, probably because I was working at summer camp taking care of young Jewlings.)

First, let’s take a quick look back at the previous four.

Year Two:  “This Day in History, Brought to You by the Letter Aleph and Rotem the Ars”

Sanity rating:  6 out of 10, still trying to take it all in and make sense out of life, characterized by statements like, “the holidays here are amaaaaaaaaaaazing!!!!!!!!”

Year Three:  “Holy Crap, You Start a Blog and Next Thing You Know, You’ve Been Living in Israel for 3 Years”

Anybody know where they were three years ago this moment? I do-on a chartered Nefesh B’Nefesh flight from JFK Airport to Ben-Gurion, not really knowing what was in store for me. And if you had asked me on August 9th, 2006 where I saw myself in three years, I don’t know what I’d say. I certainly wouldn’t have guessed Aroma on the Upper West Side sporting a shaved head and blue jeans despite the oppressive humidity. (NOT BALD! Shaved.) I would have expected and hoped to celebrate three years, that milestone after which your NBN financial assistance vests, IN Israel but does aliyah really ever unfold as an immigrant expects?

Sanity rating:  7 out of 10, humbled, nostalgic, characterized by statements like “I’m surprised I made it this far” and silly jokes about dating supermodel Esti Ginzburg

No, REALLY, four years ago today, I was making aliyah, leaving JFK and landing at Ben-Gurion on August 10th, 2006. I was telling someone this morning that the aliyaversary feels almost as significant as a birthday or Rosh Hashana in terms of its meaning as a major milestone. For someone who wasn’t always completely sure if he’d make it to four years, it’s a big deal. Actually, it would be more accurate to say I wasn’t sure I’d make it to one year; I don’t think I ever wondered about “four.

Sanity rating:  3.5 out of 10, characterized by many references to stress and way too many “yiyeh b’seders” (this was a tough year), recognizing the negatives but appreciating the positives

Year Five, “Five Years in Israel: What Does Aliyah Look Like?”

“Last year, I put a lot of myself into this entry recounting each of my first four years and the rocky path I had traveled.  I’m happy, actually relieved to say that this year was far less stressful for me, and even felt, dare I say…normal?  Maybe that’s how you know you’ve finally started to fit into this place.”

Sanity rating: 9 out of 10, characterized by realization that “had I just made aliyah without accomplishing anything else, dayenu”.   Plus, an awesome slideshow montage, if I do say so myself.

So what to say this year?   I told my roommate Yosef the other day that for the first time, this day doesn’t feel like such a milestone.  His response?  As expected, “congratulations, you’re Israeli”.  Which is funny only because, aleph, he’s a fellow American who’s been here only 2.5 years longer than I have, and bet, because….well…we still drip Americanness like a third floor Tel Aviv air conditioner drips water.  Him telling me I’m Israeli is like a five-week old telling a three-week old, “Congratulations, you’re a man” thirty seconds before they go poo themselves.

But I get it, and got it before he said it.  Even though there are a million things that make me American, I know I am more Israeli than I was a few years ago, especially when I’m in America.  After listing a few examples, I just deleted them, because who do I need to prove it to?  I spend less time thinking about this stuff than I used to (just slightly).   I am who I am, a somewhat experienced immigrant of six years (do I sound like I believe it?  Yes?  Ok, let’s move on.)

An experienced immigrant, maybe.  An oleh vatik?  Well, I’m not willing to say that.  A few months ago, in response to back-and-forth blog posts in the Times of Israel about whether olim chadashim should be complaining or not, I wrote this piece, “Angry Anglo bloggers, can’t we all get along?”  Only someone beyond the oleh chadash stage would have the authority to write it.   When I look back at those days, it seems like a while ago.  I can now make fun of new immigrants with my friends, not because we’re mean (“SENIORS!  TOO COOL FOR SCHOOL! YEAAAAAAAAH!!!!!”) but because we’re far enough removed that we can laugh at a caricature of ourselves that never actually existed.

In that post, I referred to myself as a made-up status, “oleh beinoni”, as in a beinoni (medium-) sized drink, in between small and large.  (Of course, that probably makes no sense so there goes my “experienced” argument.  As always….nope, still not Israeli.)   It’s often said that it’s easier for a sports team on the bottom to get up to mediocrity than it is to take the next steps to elite status.  I wouldn’t be surprised if the process to feel like an oleh vatik (“a veteran immigrant”) is similarly lengthy.  That might require me becoming something close to fluent in Hebrew, being willing to read my mail, etc.  But for now, it feels good to actually be able to look back on my life here and say, “wow, look what I’ve done.”

I can look back on my six years in Israel and feel like I matter.  Not that I was a worthless human being four years ago but I think it’s safe to say that the whole “can I do more for Israel living in the States or in Israel itself?” debate has been put to rest.  Had I moved back four or five years ago (in a forest with no one around), would it have made a sound?  Maybe a few people would have said, “hey, what happened to that guy who blogged on What War Zone?  You know, the one who cried at Misrad Hapnim when the jerky clerk yelled at him.”  I don’t feel that way anymore.  I feel like I am really doing something here.  Maybe I’m not always 100% certain of what it is, but I’m pretty sure it’s important and that it matters.

But maybe the biggest way I know that I’m no longer an oleh chadash is that this blog post really didn’t need to be written.  In past years, no way would I have let the big anniversary day pass by without having this post ready to go live.  It’s three days later and if I didn’t publish it, I think I’d be ok because what am I burning to say?  Less and less, I see my accomplishments here as those of an oleh and more as those of just a person.  I wouldn’t be surprised if there is no aliyaversary post next year.  But we’ll see.

So here’s to six years in Israel and lots more adventures to come in this, my seventh year.  Thanks for reading; now if you’ll excuse me, I need to go work on my Yom Ha’atzmaut list.