Posted at 9:46am on Jun 6, 2012 in Benji's Getting Serious, I Love This Place, Life on the Home Front, This Aliyah Moment is Brought to You by the Letter Aleph, Video by Benji Lovitt 0 Comments

Israel is a dangerous place. Between the unrest in Egypt, the threat of war with Iran, and matkot balls flying around at the speed of light, we can never know what the future holds. I was reminded of this last week when I threw my back out while walking on the beach. Not “threw out” as in “gave it to the alte zachen dude after he yelled outside my window for the 873rd time,” but “threw out” as in did enough damage to myself that I could tell a very naïve person I had injured myself in combat and he might actually believe me.

Back pain can be hell. The upside, for all you writers out there, is that you’ll have plenty of time to lie in bed and craft a blog post. (Who am I kidding, “upside?” It took me five days to get around to putting thoughts on paper. Extracting a blog post from back pain and calling it an upside is like pouring a kumkum of boiling water on your head and being happy that you can skip taking a shower.) Whether or not you feel like writing, you’ll definitely have plenty of time on your hands (and on your back). So for all of you who someday find yourself incapacitated and off your feet, here are 10 things to do while lying in bed for a week:

What better time to video chat than when you’re lying flat on your back for days on end? There’s nothing more attractive to your friends than the “up your nose” shot. Trust me, they LOVE it. 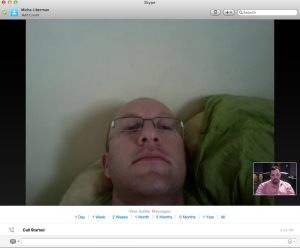 2. Reflect on your lack of a sexy (back)story

“So how did you do it?” asked everyone who ever lived. These people fall into one of two categories: people who have suffered back pain before, and people who think these injuries come as a result of lifting a washing machine over your head while fighting off wild boars. You will easily be able to differentiate between the two upon telling your story. If you explain, as I did, that you threw your back out after a violent sneeze and they nod with empathy, they belong to the former. If they stifle a laugh, however, they are of the latter, and may their grandchildren’s lower back areas be driven over by a Merkava tank.

Don’t laugh, it happens. A Google search of “back pain sneeze” reveals over 1.1 million results. Then again, “the chumus boogie” results in 2.19 million, so I’m not sure what that proves (aside from the fact that my favorite dance move has gone mainstream).

Oh, and one more thing: if you admit to back pain shortly after promoting your video from the Tel Aviv Pride Parade, expect some smart-ass comments from friends.

3. Watch your life flash before your eyes

The morning after “the snot heard round the world” (sorry, that was too perfect to pass up), I woke up unable to walk. Even worse, I couldn’t stand. Several times throughout the years I’d experienced back pain, but never in such a debilitating way. On top of that, my phone and laptop were hovering around 5% of their battery lives before dying. And I had to go to the bathroom.

My roommate was to my knowledge asleep in bed and would probably remain out for another couple of hours. Aside from the fact that, you know, I COULD NOT STAND, the physical pain and the scary thoughts racing through my head conspired to put me in a bad place. I was completely stuck, alone, and terrified, kind of like the guy in “127 Hours,” if you replace “cutting own arm off with knife” with “pooing on self” as the worst-case scenario.

Silly or not, I also entertained the fantasy that had I served in the army like an Israeli gever gever, I would be tougher and have a higher tolerance for pain. Surely had I suffered in Lebanon (or at the bare minimum, been forced to run a mile with other out-of-shape immigrants with laughable Hebrew), I could have throw myself on the ground and dragged myself to the bathroom like a combat soldier inching his way through the mud (or centimetering, as it were). My friends have since told me that this comparison is hogwash. Regardless, I’m thrilled to say that my sheets lived to fight another day upon the waking of my roommate. It’s not clear if my yelling his name was what awoke him from his slumber, but the fact that I reached the point where I was willing to try speaks volumes about my predicament. Thank G-d he was home as I was really averse to having to yell for the neighbors.

So, yeah, thank G-d for my roommate. Unfortunately, I think this incident set back my plans of living alone by five more years.

4.  Visit every page on the internet

There’s nothing like lying in bed for catching up on your web surfing (after your roommate wakes up and plugs you in, of course). Before my phone died that first morning, I managed to update my Facebook status, in a desperate effort to entertain and crowdsource for help (because what else is Facebook for?). Some answers I received to my “what to do?” question included “beer” (that would only make my bathroom situation worse), “smoke a joint,” “get married” (which would solve my new fear of living alone), “rub hummus on it” (already do that daily as a preventative measure), and of course, “yiyeh b’seder.”  More on that one later.

5. Take joy in the little things you tend to overlook

Like standing. When you finally realize that you can get out of bed painlessly and support your own body on your own, it’s really exciting. I briefly considered doing a fist pump until wisening up.

Random Person: “Hey, how’d you hurt your back?”

Idiot: “Getting over my back pain.”

RP: “You realize that’s the worst story ever, right?”

6. Reflect on meals past while staring at your own chest hair

Hey, a patient’s gotta eat, even while in the lying position. A patient’s also gotta cool off, especially when living in Tel Aviv in June. And therefore, it follows that a patient’s gotta look down, find crumbs, and reminisce about the food he ate several hours ago. Ahh, granola.

Not fresh vegetables from the shuk. The frozen ones under your back.  Can you still eat green beans after defrosting and refreezing ten times?  If not, I owe my roommate 20 shekels.

Thanks to a bit of research, I learned that you can order a house call from a doctor. If there were ever a time where I had nowhere to go during a two-hour block of time, this was it. If only it were so easy to schedule with the Bezeq guy. Dohk-tohr Nina showed up that first morning bearing Voltaren, an injection to lessen the inflammation (not to be confused with Voltron, Defender of the Universe. Of course that’s not what I kept calling it, why do you ask?) I’m proud to say that I handled a shot in the tooseek much better than I did when I was 5. Easy as pie. Whatever lessens the pain.

What’s great about female doctors in Israel is that they’re often also Jewish mothers, giving as much emotional support as medicine (this was not my first time experiencing this since moving to Israel). During our conversation, she gave me some advice on how to take care of myself, concluding with — what else? — “yiyeh b’seder,” my favorite phrase. Faster than you can say “nooooo proh-bleeeeeeem!” I was showing her my “yiyeh b’seder“-themed t-shirts, which she loved.  Having only been here seven years herself, she definitely got the joke. 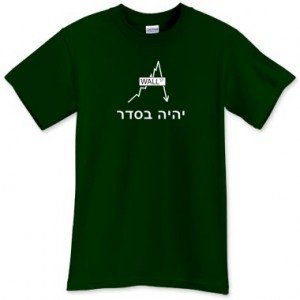 You haven’t bought a shirt yet?  Well, what are you waiting for?

How do you say “bedpan” in Hebrew? No? Nobody? Fine, Prigat will do. If our life expectancy is shorter than women’s, we might as well enjoy the little things in life. Although I always imagined this would take place while lying on the couch, watching the Super Bowl’s first overtime game, covered in potato skins.

10. Appreciate the kindness of friends

Thank you to the people who shopped for food, prepared meals for me, and just visited to say hello. A few years ago, I would have devoted this paragraph to how people in Israel look after one another more than back at home. Either I can no longer accurately assess when certain behaviors are truly “Israeli” or just “human,” or I’ve been living here long enough to have gotten used to it. Whichever it is, I can’t thank enough those who helped me out in a time of need. So thank you. While I’m not yet 100%, I’m well on my way to recovery.

Now if could only learn how to sneeze…