The Idiot’s Guide to Shavuot

“You shall count for yourselves — from the day after the Shabbat, from the day when you bring the Omer of the waving — seven Shabbats, they shall be complete. Until the day after the seventh Sabbath you shall count, fifty days… You shall convoke on this very day — there shall be a holy convocation for yourselves — you shall do no laborious work; it is an eternal decree in your dwelling places for your generations.

And you shall eat enough cheesecake to open a small dairy factory in your stomach.”

Or something like that.  Recognize this passage?  That’s right, everybody, it’s Shavuot, the most uncreatively named festival on the Jewish calendar.

Rabbi 1:  “We are going to count down a period of forty-nine days to celebrate possibly the most significant event in our people’s history, the receiving of the Torah.  What will we call it to convey its significance?”

In the Torah, Shavuot is referred to by the various names “the Festival of Weeks”, the “Festival of Reaping, “Day of the First Fruits”, and “Shaniqua”.  This chag is one of the Shalosh Regalim, the three harvest holidays which have both historical and agricultural meaning, along with Sukkot and Passover.  Historically, it celebrates the giving of the Torah at Mt. Sinai, and is therefore known as Chag Matan Torateinu (not to be confused with Chag Matan Tortilla which took place at the El Paso Taco Factory during last Thursday’s lunch buffet.) 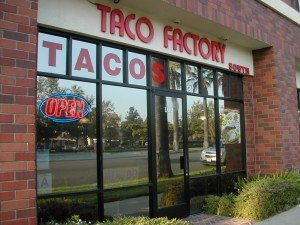 It’s glatt kosher if you were wondering…

Agriculturally, Shavuot commemorates the time when the first fruits were brought to the Temple after a grueling three-day uphill journey in the desert heat.  Unfortunately, Fresh Direct had yet to open their Jerusalem branch.

Wife:  “Honey, Rivka invited us to go to see “The Notebook” rereleased in 3D this evening.”

Husband:  “Sorry, I have to receive the Torah tonight.”

The preparation for Shavuot begins on the second night of Passover with the counting of the Omer, a daily blessing lasting forty-nine days. The counting requires discipline, dedication, and stamina.  In fact, some Talmudic scholars translate “Sefirat Ha’Omer” as “P90X”.  The Omer is a time of great anticipation, one because we eager to celebrate the receiving of the Torah, and two, because we are eager to stop counting.  The counting requires only a slight knowledge of Hebrew and first-grade math skills.  And for those who like to count the Omer while on the go, they can download an iPhone app which is especially useful to those who find difficulty in adding the number one. 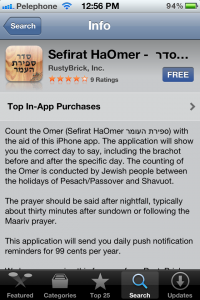 I want to know, what’s the cut-off Hebrew on the right?  Did they try to sneak a “yiyeh b’seder” past us?

That these two holidays of Passover and Shavuot are related is not by chance.  While Passover freed us physically from bondage, the giving of the Torah on Shavuot redeemed us spiritually from our bondage from idolatry and immorality.  This explains the popular Shavuot pickup line, “Hey, baby-can I tie you up and then free you from bondage?”  Shockingly, this line has never actually worked.

Shavuot is also known as the Pentecost, because it falls on the 50th day of the Omer.  It should be stated however that Shavuot has no connection to the Christian holiday of Pentecost, occurring 50 days after Easter Sunday, or to the BCS National Championship game which takes place 50 days after the final regular season game (inside joke for American sports fans).

Traditions on this holy day include eating dairy, studying all night, and for many, shaving a hideous growth off their faces.  It is customary to stay up the entire first night of Shavuot to study Torah.  Many Jews in Jerusalem culminate their night of learning by praying at the Kotel at sunrise.  Those who do not reside in the Holy City may pray to a wall closer to home provided they are not worried about resembling a mental patient.  In fact, most of Tel Aviv learns till well after 2 AM and by “learn”, I mean funnel arak.

In the Diaspora, it is customary to eat at least one dairy meal on Shavuot, and in Israel, at least 400 cheesecakes by 10 AM.  There are varying opinions as to why this is done. Some say it is a reminder of the promise regarding the land of Israel, a land flowing with “milk and honey.”  Some say it is because our ancestors had just received the Torah and the laws of kashrut and did not have separate dishes available.  And some say this is G-d’s way of having fun with millions of people who share a lactose intolerance.  Whether or not you believe the last theory, avoiding long car rides with friends on Shavuot is highly recommended. 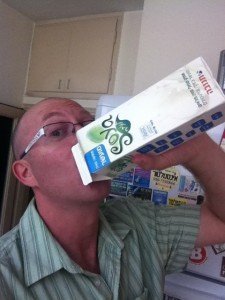 To all of you, have a happy and healthy Shavuot holiday.