Posted at 4:42am on May 5, 2012 in I Love Hebrew, I Love This Place, This Aliyah Moment is Brought to You by the Letter Aleph by Benji Lovitt 0 Comments

Aaaaaand we’re back from America.  Did you have a nice Yom Ha’atzmaut, my loyal readers?  If you didn’t eat at least 45 cows, busha v’cherpa to you (roughly translated as “shame shame shame, everybody knows your name”).

I write you (wrote, rather) from seat 28D on my Delta flight back to Israel.  Frequent flyers* may know that Delta eliminated the direct flight from Atlanta to Tel Aviv a year or two ago, probably because they’re raging anti-Semites.  (Either that or for legitimate business reasons.  One of the two.)

(*My friend and former colleague once told me that he overheard our Israeli co-worker speaking to the airlines on the phone and referring to what he thought was called his “freaking flyer membership”.  You can’t make this stuff up.  By the way, after five-plus years in Israel, I have Gold membership in the frequent freier club.  Unfortunately, it gets me very little except screwed.)

I’ve taken the JFK-Tel Aviv route a few times and, well, it’s not so bad.  With real problems in the world (we may be on the verge of war with Iran….yiyeh b’seder!…..global warming is causing worldwide natural disasters….yiyeh b’sedeeeeeeeeer!), I’ve gotten used to these planes not having individual TV screens.  It does suck a little when you can’t even watch the movie on the big screen because your controller is broken.  WTF, Delta?  And by that, I mean of course….. 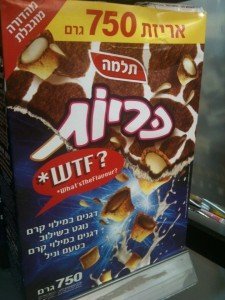 This one made the rounds a few months back.   (Click to enlarge if you can’t see the smaller text)

I mean, seriously-how did this happen?

Moty:  “Ehhhhh, tov-I hev called you here because we bedly need new cereal slogan.”
Shmuel:  “I hev two ideas.  Nahmber one:  We taste good.  Nahmber two:  deh brekfest of chempions.”
Moty:  “Ma, ata dafuk?  B’seder, I hev it.  How about WTF?”
American Masa intern walking past the office:  “Excuse me, I’m so sorry for interrupting, but I couldn’t help overhearing your conversation.  I kind of think that maybe you shouldn’t use WTF.”
Moty:  “Why not?”
American:  “Because everyone knows that it stands for ‘what the f***?’ “

So yeah-the downside of no individual TV screens is that you have no individual TVs.  The upside is watching the cleavage shots of “Mission Impossible:  Ghost Protocol” ‘s Paula Patton blown up on a massive screen, knowing that certain people on the plane are squirming in their seats trying not to look.  (Sorry, fellas, I can’t join your minyan.  Do you see what movie is on?)

Highlights of the flight (besides the movie): 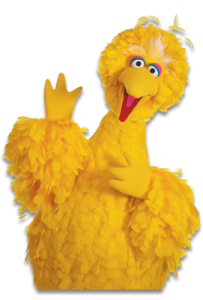 This generalization has been brought to you by the number 18 and the color “chumus beige.”

One of the flight attendants made an announcement to “please not bring your trays to the galley, leave them on the floor, or hand them to the flight attendants, as we will come get them as soon as we can.”  The funny part?  The first time, she made it only in English.  What’s the point of that?   That’s like making an announcement only in Hebrew to please stop going to the Cheesecake Factory and eating a giant burrito in one sitting.

“Mission Impossible” again:  because my stupid controller wasn’t working, I couldn’t hear the audio.  While looking up at one point, I saw that they referred to Tom Cruise’s character Ethan Hunt as “Eitan” in the subtitles.  NO WAY!!!  HE’S ISRAELI!  Who knew?  Next mission, if he chooses to accept it:  to get ten people to finish a meeting without interrupting each other and yelling “shniya!” every 45 seconds.

It’s good to be back.  More blog updates and columns on the way.