Posted at 5:01am on Mar 3, 2012 in Comedy, Culture, I Love This Place, Life on the Home Front, That Thing That Pays the Bills, This Aliyah Moment is Brought to You by the Letter Aleph by Benji Lovitt 0 Comments

Another trip to America (thank you, Jspace), another requisite comparison.  It really is amazing and slightly mind-blowing how every time I return, I feel more Israeli, picking up on things that I never noticed before, like Neo in “The Matrix”.  Or Marty McFly after he goes back to 1985 and sees his “new” family.  I look around, silently wondering, “am I the only one seeing these things?”

Thank you, Israel, for making me completely unable to waste even a drop of water anymore.  The size of the beverage glasses at the suburban Chili’s/T.G.I.Friday’s/Bennigans/Applebees/Ruby Tuesday’s/Houston’s (did I forget any?) chains is unreal.  I’m pretty sure the entire Kinneret could fit into one of them, at least before this wet winter. Have you noticed the robots they employ as waitstaff whose brains self-destruct if you ask them to do the stray from their routine?  A few years ago, I finished my dinner at some restaurant and wanted just a little more soda to wash it down.  When I asked the waiter for just a small partial refill, using my fingers to visually show him, he still brought me back a massive full glass.  I’m surprised that the word “waste” even exists in the English language.   Robots.

(And if you’re bored, here’s a fun game to play with your friends:  translate American restaurant names into Hebrew.  Cheeleem.  Beniganim.  TGI Yom Shishi.  Ruby Yom Shlishi.  Of COURSE I’ve never done this before with my friends Emil and Lymore in the fall of 2004, why do you ask?)

Now watch what I do here, as I talk about cup size in a total non-sexual manner:  holy crap, the cup sizes you can find at gas stations in the middle of nowhere is unreal.  Check this out:  SIXTY-FOUR OUNCES!  That’s more than FIVE BOTTLES OF BEER!!!  How are Americans not constantly peeing? 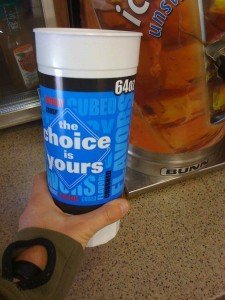 In case you were trying to gain perspective, this is the hand of an adult.

Another time, with my sister at Chili’s, the guy kept returning every few minutes to check my glass.  It’s great service.  I love it.  But if you dare cover your glass with your hand to prevent them from refilling it and then look closely, you can actually see smoke coming from behind their ears as they short-circuit.  Give it a try sometime.

This time, back at Chili’s with my sister, I asked the waiter specifically for just “half a glass of water”.  Before you could say “I don’t give a flying falafel ball about conservation”, he had poured me a full glass.  Next time I visit, I’m absolutely offering my waiter a sum of one million dollars if and only if he can pour me half a glass of water.  If you’re at home saying, “yeah, but you don’t have a million dollars”, you’ve missed the point.

On the topic of water and conservation, not having a dishwasher obviously changes your behavior in the kitchen.  Let me ask you this:  if you made coffee, added milk, and then stirred it, what would you do with the spoon?

A)   Clean it with soap and water

C)   Put it in the dishwasher

D)   Flush it down the toilet

I can’t do C.  I just can’t.  It’s such a waste and to me unnecessary, unless you really believe that every Purel hand-washing station you see in America is justified.  I know the two aren’t exactly connected but I suspect there’s a correlation.

All this really boils down to the whole phenomenon of feeling more American in Israel and Israeli in America.  And now for a few more pictures…. 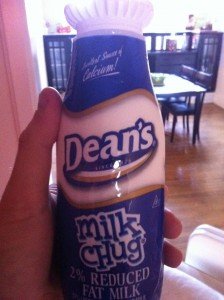 If you read this as “milk חוג”, you just might be Israeli. 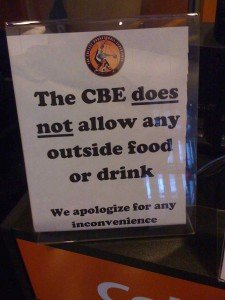 Only in America would you set a policy and then apologize for it.
(Israelis know what I’m talking about:  the abundance of “sorry”s.) 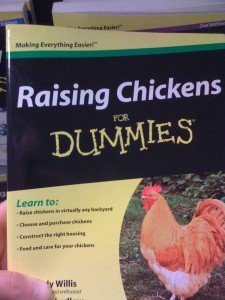 I don’t even know what to say about this one. 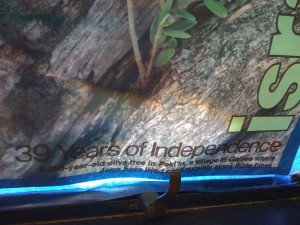 A certain synagogue is celebrating their 25th anniversary of having up-to-date educational materials.