The Times of Israel: “The Idiot’s Guide to Bombing Iran”

Posted at 8:27am on Feb 2, 2012 in Benji's Getting Serious, Comedy, Current Events, I Love This Place, Life on the Home Front, Now I'm Just Being Silly, This Aliyah Moment is Brought to You by the Letter Aleph by Benji 0 Comments

Hello, my loyal readers!  Everyone ok out there?

Quick life update:  I ran my car into a tree.  The good news is I’m fine.  The bad news is it was on Tu B’shvat.  The JNF is pissed.

Now for a real update:  almost three years ago, I had a meeting with David Horovitz, then the editor of the Jerusalem Post.  I had requested a meeting with him to pitch a regular humor column.  I walked into his office, eager, excited, and full of confidence like a band member meeting with a big record producer to hand over their demo tape (if you’re reading this and under 18, a tape was how dinosaurs used to listen to music).  Before I could give my shpiel as I had done many times before, he cut directly to the chase like a man who, well, had limited time because he was the editor of the Jerusalem Post.  Here’s the thing about record producers:  it’s probably safe to assume that you aren’t the first one to sit in their chair so excuse them if their enthusiasm is a bit tempered.

He proposed that I pitch him three different stories.  I’m not sure what response I was expecting but I suppose it was closer to “Omig——d!  You are simply the funniest thing since chicken-fried falafel!  Here’s a blank paycheck and a byline.  WHEEEEEEE!!!!!!!”  (Skeptics:  have you ever seen chicken-fried falafel?  IT’S A RIOT!  Easily the funniest thing since a buffalo in a mikveh.) 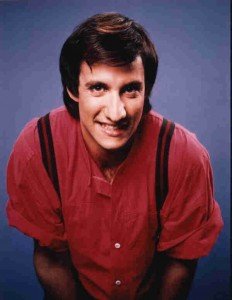 Since I still don’t know how to use Photo Shop, I can’t create that image.
Instead, I’ll give you an image of Balki.  Just because he’s funny.

I was about to leave Israel to work at summer camp and I wasn’t so interested in writing three stories in hopes that he might like one.  Was I lazy?  Maybe.  Unclear.  I guess it wasn’t important enough to me to follow through under those circumstances.  Or maybe it wasn’t the right time.

Perhaps it’s a function of living in such a tiny country but for at least the second time in the last couple of months, a fun and exciting opportunity is returning to me and saying, “MAH KOREH, GEVER?!”  Within the next few days, David’s new news site, the Times of Israel, will be launching and, thanks to an invitation from someone at the Ops & Blogs section, the site is already hosting my first article, “The Idiot’s Guide to Bombing Iran.”  For a sneak-preview of the site, you can read it and some of the other blog posts on the Ops & Blogs page specifically, although the rest of the site isn’t live just yet (and even that page may be down….but my article should be up….for the most part.) 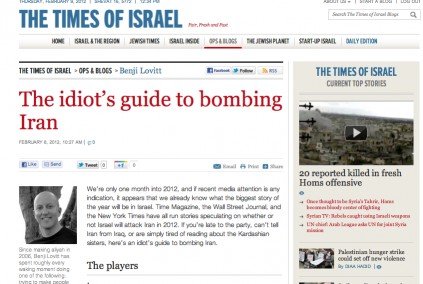 When we first met a few years ago, David pointed out that the “slice of life”/typical oleh perspective wasn’t exactly what he was looking for.  After the initial response of “but my stuff is good” passed through my mind, I realized that he had a good point.  Every year (or three months), there’s a new immigrant fresh off the boat, ready to tell the world that Americans and Israelis are different and that there are so many crazy, hilarious, exhilarating, and ridiculous things about getting settled in this country.  When I read them, I think, “Really, oleh chadash?  Been there, done that.  How about something new?”

It’s not unrelated that I’ve been writing less on this blog for the last couple of years because, even taking into account how much I loved nothing more than documenting my first few years in Israel in what I hope was hilarious fashion, how long can you do it?  How long can you be the new, wide-eyed, commenting-on-every-little-thing-while-trying-to-assimilate-into-society oleh?  Not that long.

David made me wonder if the smarter path wasn’t to try some kind of political satire, writing about the news and more high-brow topics (you know, because Israel is never in the news.)  It may have taken three years but this invitation extended to me by the Times of Israel was all I needed.  This article on Iran was my first ever crack at such a serious topic and I think it came out great.  I can’t imagine dealing with anything graver and certainly hope this isn’t the last time I take on such a subject.  Not to toot my own horn but if you’ve read my stuff before and if you’re still reading, I don’t think you’ll hold it against me.  I think this might be one of my favorite pieces I’ve ever written.  I’m also not just kissing up when I say this but I think David is a great writer; I wouldn’t have written this for just anyone.

Take a look, comment on the site, and as always, share if you like.  Thanks to my friends Liza and Yoav for the last-minute proofing and extra sets of eyes.  I give you “The Idiot’s Guide to Bombing Iran.”