Posted at 6:08pm on Jan 1, 2012 in Benji's Getting Serious, Comedy, I Love This Place, Jew Stuff, That Thing That Pays the Bills, Video by Benji Lovitt 0 Comments

Once upon a time, there was an oleh….we’ll call him Renji.  Renji got fed up with the stupid tourist t-shirts that hadn’t changed since the Ben-Gurion Administration.  You know the ones:  “Super Jew”….”My Job is So Secret, Even I Don’t Know What I’m Doing”…the upside down “Go *&^% Yourself”.  Ok, admittedly, that one is still kind of amusing to this day.  But you’re telling me that we can’t do better in the 21st century than to recycle the same dorky shirts?

After complaining to his friends about the same ol’ shirts, Renji finally did something about it and hired his good friend Swillary to design some new shirts based on a few ideas he came up with.  Voila!  Funny Israeli t-shirts!

The response to Renji’s shirts was quite positive but there was only one problem.  Renji couldn’t sell them.  Well, to be more accurate, Renji couldn’t make them, not in bulk anyway.  Rather than front the money for tons of designs, styles, and colors, he set up a site on a Cafe Press-type on-demand site where they’re only printed (wait for it) on demand.  Before the shirts were even marked up, they were over $20 at the absolute minimum.  Renji knew from that point that nobody would want to buy them but he didn’t feel like committing his life to running a t-shirt business. 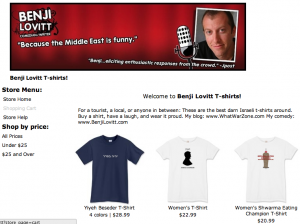 This little fairy tale is so old that Renji even had hair and lenses on his old t-shirt site.
Unfortunately, his hairline did not live happily ever after (although it did recede into the sunset.)

Oh well…you live, you learn.  Renji was pleased that he had at least given it a shot and never regretted it a bit.  He learned that from every failure comes a lesson and that no project is so urgent that it must be rushed into immediately. Another time would come.  However, Renji continued to think about his t-shirts, wishing he might get another chance to raise the lame level of t-dorkiness in local stores.

One day, a year and a half later, Renji was accepted to participate in the Schusterman Foundation’s ROI Summit, a conference which “unites young creative Jews with like-minded peers, mentors and professionals in an effort to develop and promote current and unique initiatives.”  Upon checking into his hotel room on Mt. Scopus, imagine Renji’s surprise to find out that his roommate was a man named David Kramer.  Who’s David Kramer, you ask?  Well, David Kramer just happens to be the founder of the NU Campaign, a company which makes socially conscious t-shirts supporting different causes and stories.  Amazingly, David and Renji had traveled in the exact same circles, working with groups like Masa Israel, Birthright, and Nefesh B’Nefesh.  They stayed in touch after the conference, meeting several times in Jerusalem and even in Denver at the JFNA General Assembly.  And now?

Renji and David are proud to announce the NU Campaign’s new “Benji Lovitt series”!  There’s a new page on the site called “Funny” which includes, as of today, four shirts.  Three of them are Renji’s.  Which ones?  In the unlikely event that you can’t guess, they’re the ones which say (you’re not going to believe this) “yiyeh b’seder“.  More will follow. 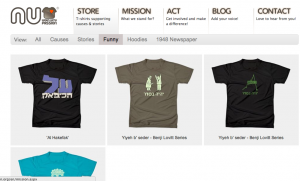 These specific shirts are $18 for online purchase but are on sale in the store, located on Shlomzion Hamalka Street, just a stone’s throw from Ben-Yehudah and Zion Square.  Anyone reading this who frequents Jerusalem should definitely check out the store where you can find shirts benefitting causes like Save a Child’s Heart, the Leket Food Bank, Arsim for Hair Gel, and more.  (Ok, so forget the last one.)

They say that good things come to those who wait.  Hopefully t-shirts come, too.  I’m thrilled to be working with such a cool initiative and to be helping them promote all their shirts to Birthright Israel groups starting this winter.

So head on down to the store to check out the cool stuff they’re doing and to the website as well.  And if you can’t make it any time soon?  Just remember….yiyeh b’seder!

From our recent Hahafuch variety show….enjoy!