Boker tov-did you have a nice Shabbat?  Funny how after five-plus years here, I’ve realized that I call the weekend “Shabbat” irrespective of religious connotations.  I had a typical lazy weekend in Jerusalem, relaxing and watching illegally downloaded movies, or as I like to call them, “movies”.  On the topic of copyright infringement, I was chatting with my friend Jason about SOPA, trying to figure it all out.  I don’t know enough about the topic to have come to an opinion yet but as I’ve discussed with my chumus club friends, it is bizarre that ever since Napster came along, everybody steals music and movies with no conscience.  I appreciate the major companies’ desire to take action but as Jason put forth, perhaps Congress should be using tweezers to combat piracy, not a sledgehammer.  Which brings me to my main question:  “how do you combat piracy with tweezers?”

Whatever…I’ve got “movies” to watch.

This weekend, I decided to rewatch the “Star Wars” trilogy, as it had been several years.  I’m sure I saw these approximately 87,500 times as a kid but not in at least fifteen years or so, when they were rereleased in theaters during my last semester in college, and probably not for many years before that. I wanted to see if I would appreciate them different as an adult.  (Ever see a movie as a kid and then realize many years later that you might have missed some important details the first time around?  I seem to remember “The Sound of Music” being on TV on Thanksgiving.  As far as I could tell, it was a happy movie about family, dogs biting, bees stinging, lonely goats, and other stuff.  A couple of hours in, I’d fall asleep.  Fast-forward to adulthood.  Do you know what that movie is really about?  NAZIS!  Lots of ’em!  Big, bad ones!  Austria in the 1930s…who would have thunk it?  Kind of put a damper on all the frolicking and “do-re-mi” shenanigans (shenaniganim)). 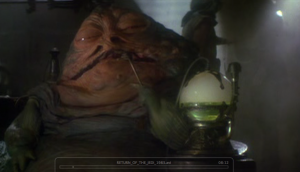 Now I can rewatch the first (last?) three episodes which I definitely haven’t seen since the theater.  I’d love to watch them with Hebrew subtitles just to see if they translate Darth Maul as “Kenyon Darth”.