This just in:  the Red Hot Chili Peppers are coming to Israel, scheduled to perform in Tel Aviv’s Park Hayarkon on September 10, 2012. According to Haaretz, “tickets will go on early sale for a special price of NIS 320, going up to NIS 390 once the early sale is over. Premium and VIP tickets will also be available for NIS 750 and NIS 1200 respectively.”

After the visits of Air Supply, Whitesnake, and Roxette, whose last hits peaked around the time of the 2nd Temple’s destruction.  For this reason, music snobs, please save the “they don’t rock like they used to” comments.  We’re just happy to get them when they’re still relevant.  Maybe we’ll even get something the likes of which we saw in spring 1992 when Guns n’ Roses played here, causing Axl Rose to yell onstage, “Shalom motherf*****s!”  (Well, I didn’t see it.  I was here on Year Course and missed it.  No excuses.)

And if anyone out there is actually still wondering, “why does Tel Aviv get all the concerts?”, the answer is simple.  Do you really want to see Flea wear a kittel?  (This question ensures that I will finally reach page one for the all-important “Flea wears a kittel” search query.)  Last year, “Sex and the City 2” ads were banned in Jerusalem.  If the Chili Peppers played the Holy City’s Teddy Stadium, we’d have to hear the title track from their classic album performed as “Blood Sugar Shas Magik.”  And who wants that? 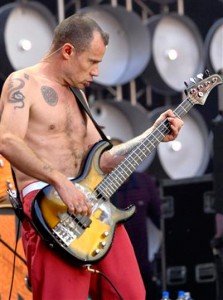 “Put a shirt on!  It’s cold!”
(Wait, he knows he can’t be buried in a Jewish cemetery, right?
Yet another moment where I wish I could PhotoShop.)

In fact, I was able to dig up their setlist from their last trip to Jerusalem.  Hopefully we’ll hear some of these again.

Higher Ground (The Dome of the Rock…it will be ours again!)

Aeroplane (for my ten kids)