America: The Photo Montage (How Much Weird Stuff Can I Find at the Airport?)

Hello, my loyal readers-I’m back from the USA and, boy, are my arms tired.  Or something like that.  And before you can say “looks like winter has arrived in Israel”, it looks winter has arrived in Israel.  Because at least in the places I’ve lived, we only have two seasons:  “Jesus Christ, I can solve the water shortage myself by draining my sweaty t-shirt out in the Kinneret” and “Hey, Start-Up Nation, could I get warm water to come out of my sink during the winter?”*  The first is categorized by high temperatures, 147% humidity in Tel Aviv, and sales of ice cream that could the Greek economy can only dream of.  The latter with, well, washing your hands in cold water, along with cold in Jerusalem and rain, although seemingly never enough.  Am I crazy or is the water level in the Kinneret always low, even after a week of downpour?  Ok, whoever pulled out the drain stopper, put it back please.

*I’m very happy with my yunkerim, whatever the hell those are, that allow me to have a hot shower within a minute.  Who needs the Dude anyway?  But I’m not going to flip a switch just to wash my hands for 15 seconds.  Maybe I should just combine my bathroom and shower activities.  Or not wash my hands after the bathroom.  Hey, is anyone still reading?  (Seriously, does anyone know what a “junker” is?  I had never heard of it before and I can’t find much online.)

And speaking of sales, I stopped in duty free at Ben-Gurion Airport before my flight out.  Israelis shop at duty-free like they have 5 minutes to live. The terminal could be on fire….they’re walking out of there only when they’re good and ready and not a moment sooner.  People love the feeling of getting a deal here and can you blame them?  Somewhere out there, there’s a guy who’s spending $1500 on a plane ticket just to get into the airport, spending $1000 in duty free, and then throwing the ticket away.  If Obama wants to impose a real stimulus package, he should set up giant billboards on the Ayalon saying “DUTY FREE!!!!” with arrows pointing to America.  You want to know why people were sleeping in tents on Rothschild?  Because they were broke after walking out of the airport with a Wii underneath one arm and 10 cartons of cigarettes under the other. 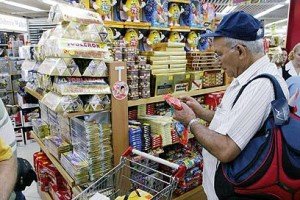 As always, it was good to visit the US of A.  As is my relatively new tradition, I passed some time at the airports walking up to unsuspecting soldiers and thanking them for their service.  Hey, it’s not like anyone is going to do it, you know…on Memorial Day (because who sees soldiers at the mall or beach?)  Here is a brief excerpt from one conversation:

Now those are some American manners.  “I see your ‘Sir’…and I match it!”  How can two people refer to each other as “Sir”?  Doesn’t the first guy’s use of the word establish some kind of social hierarchy with the other guy?  I opened the conversation by putting myself below him and then he messed it all up.  There’s something not right about that.  And when I figure out what it is, I’ll be sure to do nothing with it.

And I don’t know whether this falls underneath the umbrella of good customer service but the gate agent in Atlanta called me “sweetie”, “honey”, and “baby” within a ten-second period.  That’s “achi” on steroids.

While spending approximately 45,000 hours in various airports, I took a walk through one bookstore.  If a picture says a thousand words, here are some which should give you around 14,000 to chew on.  See, it’s not just the Middle East that’s funny. 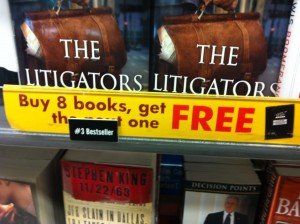 “Buy 8 books, get the next one FREE.”
Because everybody loves boarding a plane with nine books. 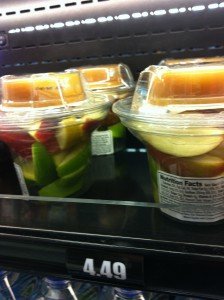 $4.49 for cut-up fruit?  No wonder people eat all the crap seen below.
I would rather lick the bathroom floor than spend a buck on an airport banana. 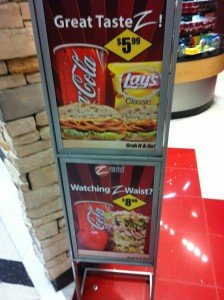 “Watching Z Waist?”
If you’re eating here, I have to wonder WZF is wrong with you. 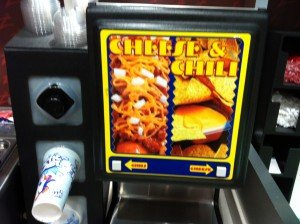 Hmm…now which toxic substance should I put into my body first?  Cheese or Chili….
Wait, what???  I CAN EAT BOTH OF THESE DISGUSTING POISONS AT ONCE???
OUT OF MY WAY, PEONS!!!!!!! 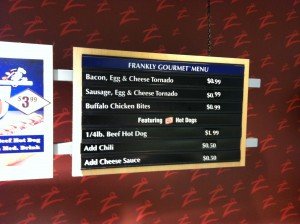 Call me crazy but “gourmet” belongs nowhere on this menu.
And frankly, “menu” doesn’t belong on it either. 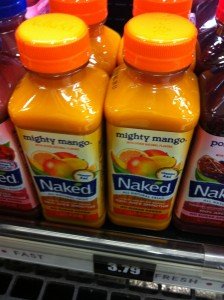 The way things are going in Jerusalem, they will soon sell these juice bottles under a long dress. 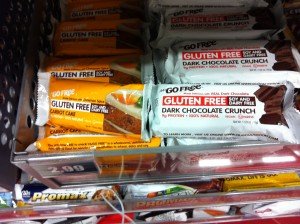 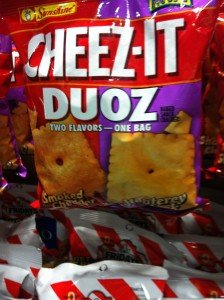 Double the crap, double the fun…in one package! 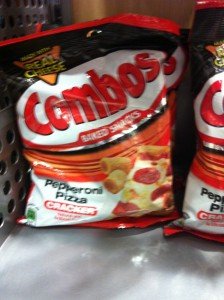 I get cherry or apple flavored snacks but there’s something bizarre about foods flavored as a main course.
Pepperoni pizza treats…how specific can they be?
“Hey, kids-try our Greek salad corn chips!” 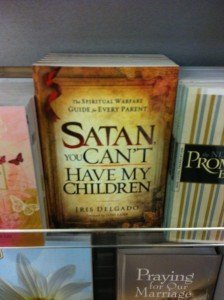 I can’t even imagine who the target audience is for this book.
Satan, apparently. 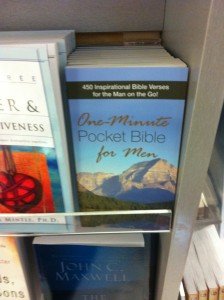 I saw some woman reading this on the bus 15 times en route to the Kotel. 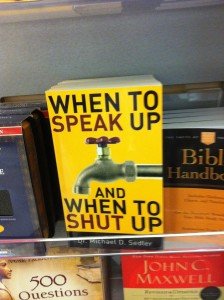 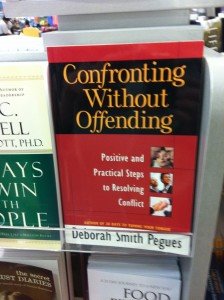 I feel confident in saying that this book will never be translated into Hebrew. 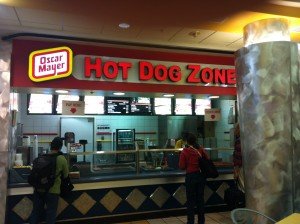 Last thing:  I’m performing at Jerusalem’s Comedy Basement this Saturday night.  Next Monday night, November 28th, I’ll be performing in Modiin at…where else?  The Olim Center.  It says the deadline to RSVP has passed but I can’t believe that’s the case.  More details here.  Hope to see you in one of these places.