Shalom from a suburban Starbucks somewhere in North America.  As I wrote on FB and Twitter a bit ago, if aliens ever do invade Planet Earth, they should disguise their spaceship as a Starbucks. The United States will enter the mothership willingly.  Is there any Starbucks line that is too long for people, especially at the airport?  Unbelievable.  And speaking of the airport, I was in one yesterday upon my arrival to the States.  Like many hotels, it had a room labeled “Business Center.”  Thank heavens.  I promptly entered and took out a $7 million loan.

So I’m back in the US again which has incredibly enough become somewhat of a regular event recently which is a good thing because I’m out of toothpaste.  And brown socks.  We Americans get so caught up with bringing stuff back for us and our friends (thank you, Target!), why has no one started a movement to bring back water?  If each individual and Birthright Israel participant brought over three small bottles of water to dump into the Kinneret, wouldn’t the ongoing water shortage be over within a year? 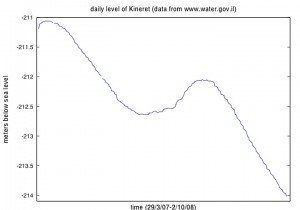 The bump occurred right after the arrival of 3 Nefesh B’Nefesh flights.

Without further ado (I’m sick of all this ado), here are my dates for the “Occupy Bamba Comedy Tour.”  I’m not sure the name can top the Chumusface! Comedy Tour but then again, I only put about 7.4 seconds into it.  They’ve been on my website for weeks now but it couldn’t hurt to add to my blog as well.

These are all Hillel/student events but if you find yourself in the neighborhood, stop by.  I could use someone to corroborate my stories about the old days in the 20th century.  Hope to see you offline!