People, these are heavy days in the Jewish state.  Worldwide condemnation….relations with our neighbors heating up…

Why sweat the small stuff when we have bigger falafel balls to fry?  You want problems?  I’ll give you problems.  After roughly 87.2 bajillion years of waiting and delays, the Jerusalem light rail finally launched and some dude outran it.  That’s just embarrassing, more so because the man is a paraplegic.

Ok, just kidding, but would it surprise anyone? I boarded the train the first week at King George and Jaffa to get to the central bus station.  Without any hyperbole or exaggeration, I think I could have walked there in the same amount of time (somewhere between 10-15 minutes).  It wasn’t the speed of the train while traveling that was such a problem, more the fact that every time it stopped (and the stops are built much too closely together), we sat there and at every traffic light for at least 2-3 minutes.  Honestly?  I’m still on the train.  I’ve been here for a month and they won’t let me off.  Can someone make sure I turned off the dood? 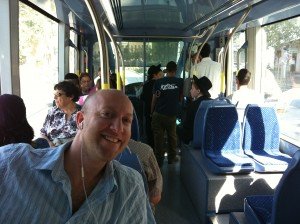 August 19, 2011:  I would take a picture of myself today in the same seat
but my iPhone died two weeks ago.

Well, here’s something for the people of Tel Aviv to look forward to:  YOUR TURN, SUCKAAAAS!

It’s true-as reported in this Globes article, the next stage on Tel Aviv’s light rail began yesterday.  I couldn’t make this excerpt up.

In contrast to the elaborate cornerstone laying ceremony 15 years ago in the presence of Prime Minister Benjamin Netanyahu (in his previous term) and then-Tel Aviv Mayor Roni Milo, tomorrow’s event will be low key, possibly in remembrance of the previous embarrassing ceremony.

Look, I can’t even complain about Jerusalem’s situation that much; I’ve only been a resident of this city just under three years.  Others have had it much worse than me.  But Jerusalem is nowhere near the concentrated “city” that Tel Aviv is; I can’t even imagine what digging up entire roads is going to do to traffic.  The estimated deadline right now is 2017; does anyone really believe that’s going to be met after the delays of Jerusalem’s train?  They haven’t even worked out the payment system yet; it’s free here for at least another month.

People of Israel, Jews of the world:  in such tough times, how to navigate this crisis and find the light at the other end of the tunnel?

I bring you THE  TEL AVIV LIGHT RAIL POOL, that’s how!

Step right up and place your bets, my friends.  If you’ve done a Super Bowl pool, a fantasy sports league, or wagered on when Mashiach will come (who hasn’t?), you know that gambling makes everything a lot more fun, even when the outcome isn’t the one you desire (I have next February 9th, 2012 in the Mashiach pool….I hope he’s wearing a sweater.  By the way, where is that dude supposed to arrive from exactly?  If he’s coming via America, maybe he can bring us all toiletries or something.)

I posted this idea on Facebook yesterday and the response was pretty positive, and frankly, why wouldn’t it be?  Can you imagine having September 23rd in the pool, and finding out on August 23rd that it was delayed a month?  How ecstatic would you be?  This has the potential to turn this inevitable nightmare of logistics and expectations on its head, providing laughs, suspense, and a possible big payoff for all involved.  You know who wouldn’t be pissed about delays, inefficiency, and unforeseen gaffes?  People in the Tel Aviv Light Rail Pool, that’s who.

So let’s figure this out:

“Pick a day? I think year or possibly decade would be more logical.” –Robin

“Not joining. Won’t be able to collect as I’ll be six feet under.” -Baila“

If I don’t have a jetpack by the time this thing is done, I’m calling it quits anyway.” -Shai

“I’m in, but you have to invest the money somewhere, otherwise it’ll be worthless by the time I win.” -Menachem

Feel the optimism!  I think we’ll have at least five entrants.  (And by the way, in honor of the above quotes, did you know that the Messiah is supposed to arrive on a multi-colored donkey?  Gee, I wonder why he hasn’t come yet.  We only cloned our first sheep fifteen years ago, ya think we’re close to breeding an ass with Rainbow Brite?) 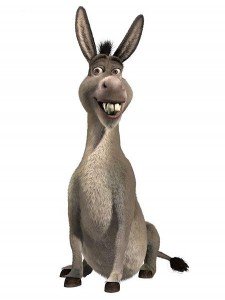 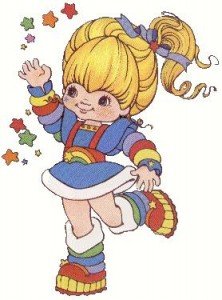 Ok, that’s gross.
Although the donkey looks pretty pleased about it.

Ok, that’s it for now.  If you like the Tel Aviv Light Rail Pool, spread the word.  It’s time to take back this country!
HA’AM!
DORESH!
NITZACHON CASPI!