Ben-Gurion Airport, Part 48…With a Twist

Seems like it’s been a while….how about another blog entry from Ben-Gurion?  Ahh, nothing sparks my creative juices than sitting at the airport at 5 AM.  I love it every time.  I’m not even kidding.

I’m flying to the States again for a vacation.  Or “holiday” as some might call it (we’ll get to that later.)

I got picked up at 4 AM for an 8 AM flight.  Think about how friendly and extroverted you are on your happiest day.  Now take the exact opposite and that’s how you feel in the middle of the night getting onto the nesher.  (And by the way, this would be a good time to talk about sheiruts.  They’re superconvenient in Tel Aviv; I’d love to have them in Jerusalem.  But would those EVER work in the States?  “Hey, lady, get in the van.  No, it’s safe, really.  I’m like a bus.”) 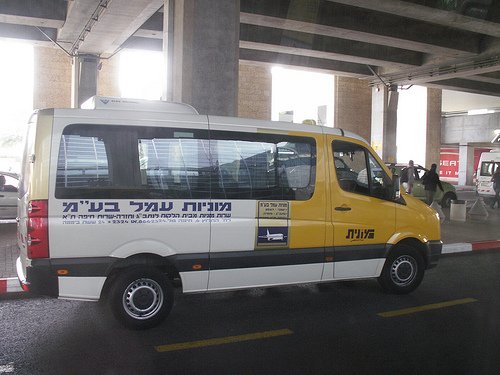 As everyone unloaded their bags upon arrival, someone recognized me who I didn’t know.  Small world, that Israel.  We started chatting away and of course knew mutual people.  Fast forward to a bit later.  While we were eating, I tried adding him on Facebook but couldn’t find him.  “I’m not on there,” he tells me.  It really is amazing to meet people who haven’t given in to the social pressures.  What’s the equivalent from yesteryear?  Not having a cell phone in 2002?  Not having email in the late ‘90s?  Hey, I’m old-fashioned in a lot of ways when it comes to communication among friends and I’m not lying when I say sometimes I wish Facebook didn’t exist (socially, I don’t believe I’d miss it…professionally, it’s a different story), but don’t people who’re not on yet feel like they’re missing out?  Forget the time-wasting at work, I’m talking about parties, events, opportunities….  You can no longer say, “If it’s that important, I’ll know about it.” No, you won’t.  Everyone assumes that people “got the invite” and who thinks about sending out email invites anymore?  Anyway, once I realized the power of community and getting a need met (subletters, finding extras for a video shoot, playing Farmville), I can’t believe some people don’t realize how it could make their lives so much easier.  Just kidding about the last one.

One more quick note:  I swear I mentioned this somewhere in the past but I’m not seeing it on my last Yom Ha’atzmaut list.  There is an unbelievable salad option at Ben-Gurion airport before you go through passport control, on the left side of the atrium right in the middle.  They cut up the tomatoes and cucumbers right in front of your face, and of course there are a ton of other vegetable options to add:  couscous, carrots, corn, chickpeas…..I have NEVER seen that in the States.  Top it off with techina and crutonim and you have a delicious winner (after five-plus years, I figure it’s time I work the word “crutonim” into this site.)  Eat your heart out, JFK’s disgusting airport Chinese food and Sbarro pizza.

In case you’re wondering which outfit I chose to brave my two international flights, obviously my Naot sandals, easily take-offable for comfort (ech omrim “take-offable”?) and, in an unexpected turn of events, my light blue and incredibly comfortable Thai fisherman’s pants which made their bold return from the depths of my closet, having not been seen in at least a couple of years.  I never know what goes with those.  I feel like a collared shirt and a bow tie would clash.  I went with the safe Old Navy yellow T-.

Anyway….New 5 AM Friend tried to get me into the Dan Lounge with him.  No luck even though I did my best to convince Nice Israeli Lady, even playing 2005’s “Yehudi Lo Migrash Yehudi (A Jew doesn’t expel a Jew)” line.  At least she smiled.  Then I told her I was in fact George Clooney.  She wasn’t going for that one either.  And in case anyone’s wondering, your Maccabi Zahav card is not an accepted method of payment to enter the Dan Lounge.  Dammit.  Instead, I was left to wander through Terminal C and play everybody’s favorite airport game:  “Find the Outlet.”

I must say that the Dan Lounge girl was objectively pretty cute and it was fun to joke with her; so why no effort to get her phone number?  For starters, while I do have a history of collecting watermelons at 6 AM (thank you, 1993 kibbutz experience), not so much phone numbers.  And then there’s the reason I’m going on “holiday” in the first place.  One word, two syllables, sounds like “whirlfriend.”

Yes, it’s true-I have a pearlmend.  At least in real life and now on this site.  Not on Facebook.  For a lot of people it seems, Facebook must be real life because they were shocked when I told them.  Since, you know….I had done the unthinkable by not telling the world and Mark Zuckerberg.  Here are a couple of fun facts:  she’s British (thus, the “holiday” reference instead of “vacation”) and hasn’t been to America in twenty years, until this trip.  I’ll let you enjoy the same questions she asked which made me laugh:

“Wait, is Ft. Lauderdale the same as Dallas?” (I’m pretty sure she meant Ft. Worth.)

“Is there a Target in the airport?”  (Perfectly legit question to be fair….how could she know?)

“If I have a sandwich in my bag, do I have to declare it?”

And just a bit ago, when I asked her if she knew who Abe Lincoln was, she said, “President….tall guy….top hat….long beard….and wasn’t he in ‘Bill and Ted’s’?”

Here’s another fun fact:  she’s re-ligious! (Typed out as I say it out loud, for effect.)  Since I know what you’re all thinking, let me jump ahead a few steps.  In Jerusalem, that stuff is easy.  You know, unless I’m jonesing for a bacon-double cheeseburger at three in the morning.  Not as big of a deal as you might think.  I’m getting the hang of it.  Like on Pesach, I even did b’dikat chametz.  I know Hebrew, don’t be so shocked.

When your pearlmend brings you to the mikveh to kasher her new dishes, don’t ask, “Sooo….uhh, did Jesus like pee in this or something?”

Isn’t religion exciting?  It’s a wealth of new laughs!  And who wins?  We all do.