The Yoms are Coming: A Photo Essay

Posted at 3:16am on May 5, 2011 in Benji's Getting Serious, Culture, I Love This Place, Jew Stuff, This Aliyah Moment is Brought to You by the Letter Aleph by Benji Lovitt 0 Comments

Five days till “63 More Things about Israel” goes live!  Four days if you get the paper.  Stay tuned…

We’re coming up on my two favorite days of the year.  Even though there has simply got to be a better way to express oneself than to say you “like” Yom Hazikaron, there’s not another obvious verb that jumps to mind (ech omrim “obvious verb?”)  I look forward to it, it’s meaningful, and I feel a strong sense of emotion when it’s going on.  For reasons which I don’t feel like going into, the Yom Hazikaron siren means more to me than Yom Hashoah’s.  Last year, I was in the States for it, only arriving back in the afternoon.  It was hard not being here.  If you wanted to encapsulate everything this country means in two days of the year, especially ones which are back-to-back, could you choose any others?

For me, it’s Yom Hazikaron and Yom Ha’atzmaut.  Naomi Shemer captures it perfectly in this song we used to sing at camp, Al Kol Eileh.  “On the honey and the sting, on the bitter and the sweet…”   That’s what this place is about, the tragic and the euphoric.  On Yom Hazikaron, we mourn and think “man, we sure do go through a lot of hard times here” and feel pain for those who have suffered over the past year and years since the time of independence (ok, so maybe those aren’t the exact words that people think but as I’ve written about in previous years, I’m speaking as a relative outsider.  With each passing year, probably a little less.  I’ll tell you next week.)

On Yom Ha’atzmaut?  “Dammit, it’s so freaking depressing to care about this place at times, we’re going to party now like it’s 1999 because this place is awesome and we need to appreciate it.”  Yeah, I’d say that’s a pretty accurate representation.

If these two days are my “favorite” or most meaningful days of the year, I’d put Yom Ha’atzmaut right next to Yom Kippur as “The Two Days Which I Want to Commemorate, and I Know EXACTLY How I Want to Do It.”  Jerusalem, you do religious, political, and just flat-out interesting (Easter in the Old City anyone?) really well.  But even though I haven’t been there the last two years, Tel Aviv, my old friend:  you know how to party.  I have a feeling I’ll be making it there this year.

Yesterday, I did my first huge shopping trip since moving into my new flat.  Not only did I spend more money than I’ve ever spent at the grocery store since moving to Israel, it was all made possible by my first ever agala experience.  Hey, I have no problem getting in touch with my inner savta if it allows me to take advantage of the 2-for-1 deal on orange juice.

And if you want to boil down what Yom Hazikaron and Yom Ha’atzmaut mean into just two photos from the grocery store, I’m not sure you can capture it much better than this. 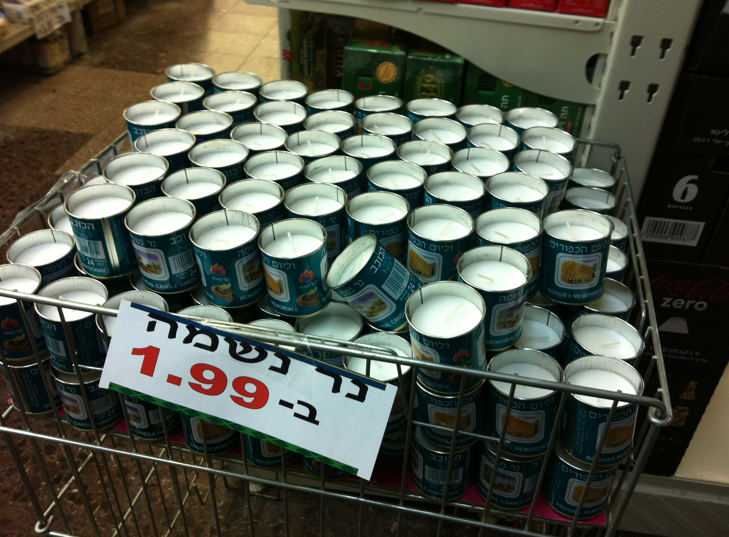 Playing the role of bitter and sting, we have Yahrzeit candles. 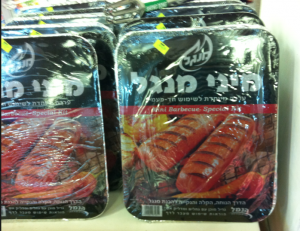 And as honey and sweet, a mini-mangal (tiny BBQ….wasn’t that an Elton John song?)

The flags are on the cars and I’m feeling patriotic.  See you at the siren.