Posted at 1:41am on Apr 4, 2011 in Comedy, I Love This Place, Jew Stuff, Once in a While I Just Have to Vent, That Thing That Pays the Bills by Benji Lovitt 0 Comments

Good morning, everyone-are you enjoying your Pesach?  Can you believe here in Israel we’re more than five days into this thing?  Two more and it’s chametz time.  (Kind of like Hammer Time but with more bread and less booty-shaking.)

I spent three nights last week around the country, performing with Charley Warady and Yossi Tarablus at a few of those all-inclusive kosher hotel resorts.  All-inclusive because when you have the opportunity to plug your system up with matza, you want to do it as much as you can.  Shows went fine for the most part, “for the most part” meaning when the front row wasn’t filled with five-year olds.  Parents, here’s a word of advice:  please….don’t ever ever ever EVER ever ever bring your kids to a show.  It’s not appropriate for them regardless of how clean it is, they won’t enjoy it, and they will ruin it for the comic and audience, even if you can’t overtly see it.

Charley was a pro and got them to be quiet, getting applause from the audience.  On another note, five minutes after the show, someone came up and introduced himself as the accountant I had emailed earlier in the week for help.  You know, because Israel is just that small.  I love that stuff.

I want to give a shout out to the Aroma in the middle of nowhere, possibly between Kiryat Gat and Beersheva, right off the highway, next to a gas station.  They served the best kosher-for-Passover rolls I have ever had.  The one north of Tel Aviv next to Beit Ha’pancake, on the other hand, served a chicken breast in between the two tablets given to Moshe Rabeinu.  I’m not complaining though-I love that these places stay open on Passover.

Speaking of food, here’s a fun snack for the holidays which my friend Margo brought to my attention.  The lesson of Pesach is to remember how we were delivered from bondage and to pray for those still in captivity to be freed.  I see no better way to teach our children than to eat pyramid Bamba. 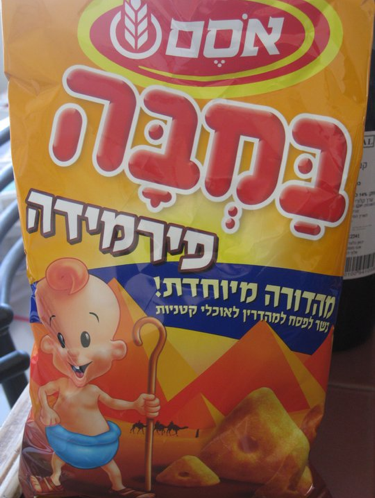 Mmm…that classic peanut butter taste combined with a reminder of hundreds of years in slavery.  It’s not just yummy…it’s educational too!  I can’t wait till the chag ends so I can buy some Lag B’Omer Doritos, fire-pollution flavor.

And here’s some breaking news:  I’ll be in the States for the second half of May.  If anybody’s interested in a comedy show for their synagogue, Federation, or mikveh club, I’d love to visit.

Osem, Bissli, and Bamba:  Time to Fire Your Marketing Staff