Posted at 7:54am on Mar 3, 2011 in Comedy, I Love Hebrew, Now I'm Just Being Silly, This Aliyah Moment is Brought to You by the Letter Aleph by Benji 0 Comments

I know I’ve said this before, but I really am planning to start blogging again.  Would I lie?  I didn’t pay my web designer in chickpeas for nothin’.  B’kitzur (because I have work to do and costumes to design), I just wanted to say a quick chag sameach to everyone out there.  In the silly spirit of Purim, check out my satirical piece on eJewishPhilanthopy.  Here’s the first paragraph:

“On the heels of their national tour and another hit holiday song, The Maccabeats are hotter than ever, and now, everybody’s favorite Jewish acapella band is planning its next move. To their fans who expected more of the same, guess again: the head-covered darlings are back and this time, it’s with an edgier, more urban touch. We won’t have to wait long to get a glimpse of what their future holds with shooting for their Passover video already under way. Titled “Shlep That Ass and Taste These Matza Balls”, the song will feature T-Pain and Missy Elliot and will be helmed by legendary filmmaker John Woo, director of masterpieces such as “Broken Arrow”, “Face/Off”, and “Fiddler on the Roof” by the 4th graders at Congregation Beth Torah in Fair Lawn, NJ.”

Satirical, only if you don’t think The Maccabeats would actually release a video by that name.  I’m telling you, people-I saw one of them punch a teddy bear last week.  Hey, Maccabeats, if you do it, there’s a kumkum of nescafe waiting for you in my apartment.  Check out the full article here.

And one quick pic, in the spirit of my old “Pantsteak” experience from 2008.  Walking in Tel Aviv on Friday with my friend Julie, we came across the following sign.  First thing that crossed my mind?  “Baby Horse.” 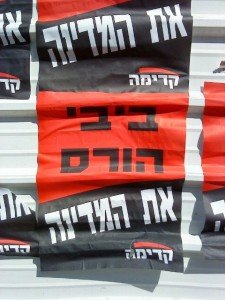 Rest assured, I read it correctly in .05 seconds (it ain’t 2008.)  But the joker in me really wanted to believe somebody was giving away baby horses.  Wouldn’t this place be less stressful with some more farm animals in our lives?  Now if the sign had said “Baby Horses are Ruining the Country”, I would have been upset.  As for Bibi…you’ll have to decide that yourselves.

Chag sameach for now and see you around here real soon, ya hear?