Macca-Beat It: Look Who’s Getting Tough

If you missed my Purim spoof on eJewishPhilanthropy yesterday, here it is in its entirety.

On the heels of their national tour and another hit holiday song, The Maccabeats are hotter than ever, and now, everybody’s favorite Jewish acapella band is planning its next move. To their fans who expected more of the same, guess again: the head-covered darlings are back and this time, it’s with an edgier, more urban touch. We won’t have to wait long to get a glimpse of what their future holds with shooting for their Passover video already under way. Titled “Shlep That Ass and Taste These Matza Balls”, the song will feature T-Pain and Missy Elliot and will be helmed by legendary filmmaker John Woo, director of masterpieces such as “Broken Arrow”, “Face/Off”, and “Fiddler on the Roof” by the 4th graders at Congregation Beth Torah in Fair Lawn, NJ.

“When the opportunity arose to work with Mr. Woo, it was a no-brainer,” said one member. “To combine his unrivaled experience with action sequences along with our rhymes and Yiddishkeit, how could we say no?” 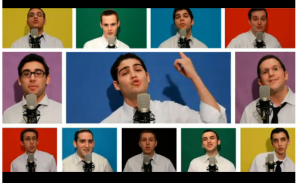 While some have questioned whether their image change is contrived or not, stories of the Maccabeats’ wild side have begun to trickle in from the road, with tales of late-night benders at Stern College that have lasted till well after 10:30 PM. One unnamed source reported the boys referring to their exclusive co-ed parties as “booty minyans” while another claims to have seen one band member adding milk to his coffee just two hours and fifty-five minutes after eating at Dougie’s BBQ. The Maccabeats refused to respond to this allegation, nor to one eyewitness account of an angry chair-throwing incident backstage by one of the band members. To his credit, after the member’s mother intervened, he promptly cleaned up the room afterwards and apologized.

As to the motivation behind their new bad-boy persona, member Immanuel Shalev said, “We wanted to get back to our roots growing up on the streets of Long Island. To….if you will….(air quotes) keep it real…” Video director Uri Westrich added, “That’s mamash true. It is real and we are in fact going to keep it that way. ‘Real’, I mean. ‘Real’ is how we intend to keep it. Mamash ‘real.’ “

What do The Maccabeats want to say to critics who suggest that their fifteen minutes of fame may be soon coming to an end? “Just like death, taxes, and gefilte fish jelly, we are here to stay. And on a side note, what is that stuff? It’s a bit gross, no?”