Shalom from an undisclosed location, boys and girls.  In case you didn’t hear, my apartment became unlivable this past weekend.  I’m still a wandering Jew, having spent this morning packing my possessions into garbage bags in anticipatzia of having to clear the way for shiputzim.

We all know that moving sucks but have you ever had to get the heck out of Dodge overnight?  I once received three days notice from a landlord; it was my best move ever.  None of this slow, methodical poring over papers and memories:  “Oh, lookee!  It’s my Garbage Pail Kids collection from 1986!  I have to scan this one and upload it to my Flickr account!!!”  It’s more like, “Pharaoh is coming.  THROW YOUR CRAP INTO BOXES!”

This morning was quite productive; it’s amazing how quickly you can pick up and move when you have to (especially when you have 40 bajillion garbage bags at your disposal).  Having moved so many times, at least now I’m not naive enough to fall for this self-delusion:  “I’m just gonna put this very important financial document in this box.  Of COURSE I’ll remember exactly where I put it in two weeks!”  Yeah, that might happen.  And falafel might fly out of my butt. 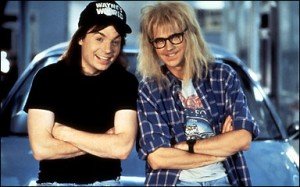 “Garth, your mom is so hot, if she were a Prime Minister, she’d be Babe-y Netanyahu.”

Anyway, my friends have been incredibly kind and gracious in extending offers of spare beds and whatnot.  Whether I take one of them up on their offer or find a short-term rental covered by insurance, everything will be hunky-dory real soon.  And since things are so up in the air, what better time to go to the land of Target and free refills?

IT’S THE “I’M HOMELESS” COMEDY TOUR!!!  I haven’t been this excited since the critically acclaimed CHUMUSFACE! tour of the fall.  I’ll be in the US from February 16th-ish to the first days of March.  Anybody want a hilarious stand-up show about life in Israel followed by a tear-jerking conversation about why everybody should go on March of the Living, Birthright, a Masa program, junior year abroad, and make aliyah with Nefesh B’Nefesh all within six weeks before joining the army and changing your last names to Herzlurion?  I thought you might.

I know, I know, it seems a bit last minute.  First of all, I already put the word out weeks ago so this is just another channel to follow up.  Second of all:  B’SEDEEEEEEEEEEEEEEEER!!!!!!!  NOOOOO PROH-BLEEEEEEEM!!!!!!!!

Because I got tired of staring at the same stand-up clip, here’s a new one I edited from a recent Hahafuch show in Jerusalem.  If it looks like my head is reflecting light, I CGI’ed it in.  I actually have dreads here.

Hope to see you on the other side of the world, my loyal readers.  Anyone who helps make a show happen wins a free chumus meal on me.  That means I pay for it.  In case that was ambiguous at all.