I’m not complaining though; after hearing numerous negative reviews about that airline’s ability to deliver passengers’ luggage on time, I’m just thrilled to have received mine. Especially since I brought back all of Best Buy’s inventory with me (those of you who asked me to bring back Apple TVs (that’s plural), a Kindle, and whatever else I’m forgetting, you know who you are). Not to mention the new MacBook I came back with. You know how when you’re carrying contraband (so I hear) or large amounts of cash, you’re completely paranoid that someone is going to pull you over? That’s how I felt walking through customs. Of course, the odds of the people at Ben-Gurion customs actually doing anything on the job is roughly the same odds of Yasser Arafat and Ariel Sharon doing the soulja boy in Kikar Safra next Yom Ha’atzmaut. (Ech omrim “contraband”?) 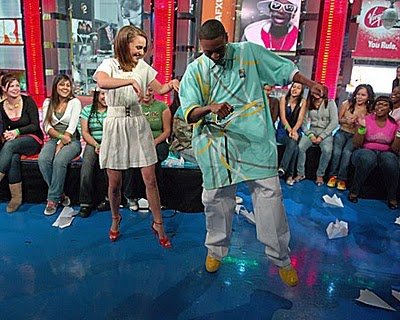 So I’m back. And you always know you’re back within 1.03 seconds of landing. Either from something conspicuous (like everyone standing up as the plane is taxiing on the runway), or something less obvious, like an insane sign displayed at the airport.

When your country is only 62, change is quick and noticeable. Like the new weaving line-forming thing at Tel Aviv’ Arlozorov bus station for the 480 line.

Or the new, massive Bank Leumi advertisement which they fixed at the airport since my last arrival. Have you seen it yet? 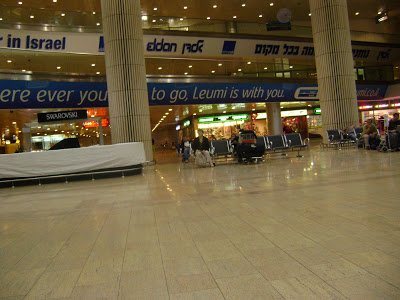 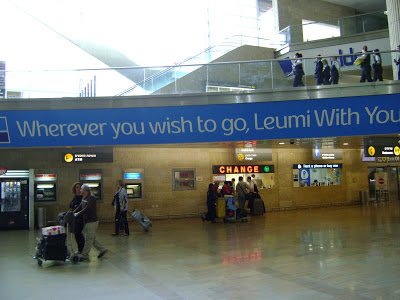 And then there’s this. Check it out, Nesher passengers! A sign listing fares to various locations! How about that? 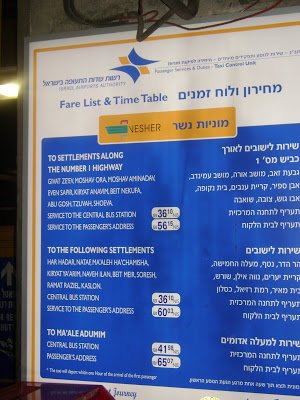 But of course, it wouldn’t be Israel if it was just that straight-forward. Looks ok at first, yes? Look closely-just how much DOES it cost? 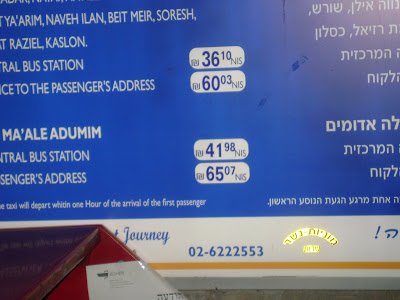 Sixty three shekels and SEVEN AGUROT? What the flying falafel were they thinking? I asked the guy at the taxi stand, “why seven agurot?” His only response? “So don’t pay the agurot.” There’s a guy invested in his job. I’m going to give him ten and demand change. WELCOME TO ISRAEL! Hey, Nefesh B’Nefesh career placement office: I know you guys do your best to get people hired. Can you get people fired as well?

And then there’s the writing which isn’t so negligent as it is….well, maybe just translated poorly. Not that it’s the translator’s fault; it’s just that the word “settlement” has completely been politicized. Can we agree on a different translation for “yishuvim”?

Otherwise, it looks like Abu Gosh is a settlement as are a gluttony of other communities. Who’s running Nesher, the Obama administration? Let’s hope no one from abroad takes these taxis.

And lastly, here’s my newest video blog from one of the stops on my trip. Who knew St. Louis was such a holy city?

Thanks to Limor and Seth for help with the video. Yep, it’s good to be back. Chag sameach, everyone!