Jesus! Have you ever tried uploading a blog post from the JFNA’s* General Assembly? It’s impossible. Mostly for the same reasons it’s impossible to go to the bathroom or carry on a meaningful conversation for more than 7.5 seconds. Because it’s the professional Matza Ball, baby!, where the power shmoozing gets no better. And this year, it’s in the party capital of the world, home of kosher beignets and hurricanes. That’s right….KIRYAT MALACHI!

(Am I the only one who can’t hear JFNA without hearing “J Effin’ A”? They became 85% more bad-ass once they changed their name from UJC.)

Ok, so we’re in New Orleans where thanks to recent developments at Cafe DuMond, the beignets really are kosher. The events are spread among a few hotels on Canal Street, just minutes from Bourbon, what some might call the Ben-Yehuda of New Orleans. And if you believe those people, I have a lovely tsimmer in Khan Yunis to sell you.

Thanks to David Abitbol, founder and rock star of Jewlicious, I’m here helping out in the Bloggers’ Alley. If you don’t know Jewlicious.com, it’s the most visited Jewish blog on the internet with contributions from a variety of people about any number of topics related to Judaism: religious observance, Israel, Jewish art, social activism, anything and everything. (I can probably just leave off “on the internet”, huh? It’s the biggest blog on the internet, but the seventh biggest on the toaster.) So how are they different from other sites? Because they take their education and activism offline with real-life events such as Jewlicious Festival, bringing over a thousand young people and performers such as Matisyahu. And then there’s this…

So yeah, I’m here. And it really is a blast. You know, if you enjoy seeing old camp counselors from 1988, ex-girlfriends, and anyone you ever met in the Jewish world (or the 1952 GA in Des Moines. That one was a rager.) If you manage to break away from the networking, the sessions are quite plentiful and presumably quite interesting (I haven’t been yet). The highlight yesterday was the opening plenary with Vice President Joe Biden speaking to thousands of people. (Thanks to security for not making us take off our shoes; are you listening, TSA?) Biden stressed numerous times that the bonds between our two countries are unshakable and was widely cheered. Full details here. 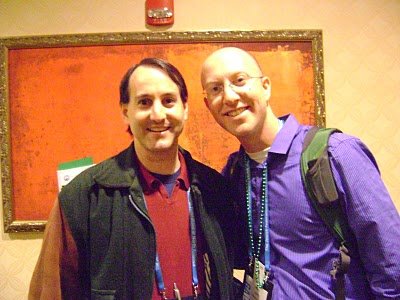 This morning, Prime Minister and Youtube star Benjamin Netanyahu gave a fairly predictable speech (kol hakavod for knowing your audience, Bibi) about Israel’s willingness to make peace with our neighbors and the need to stop Iran from developing nuclear missiles. The lowlight was the interruption by moronic hecklers who decided to get up and yell in the middle. Even if their message wasn’t extremist, what do these people hope to accomplish by screaming something incoherent and unheard by the majority of the room? Someone should have shoved unenriched uranium in their tooseeks.

Aside from speakers, we have the usual exhibition, the Jewlicious emerging artists booth, today’s day of service in the city of New Orleans, way more Hillel students and young people than I expected, and of course, ridiculous amounts of socializing.

Ok, I’ve been writing this thing for 10 hours (I told you it’s hard to get anything done) and it’s time to hit Publish. Check out the hashtag #nolaga on Twitter for updates, Jewlicious.com for great updates on some of the artists here at the GA, and chumusporn.com for a URL that’s just dying to be claimed.

See you at the Shmoozefest later tonight!