Hello, my loyal readers! Everyone doing ok in spite of the rumored chumus shortage? I must say, as upsetting as this is, I feel both honored and humbled to be your unofficial King of Chumus as evidenced by the many emails, Tweets, and Facebook wall posts I’ve received on this topic. You all want my opinion so here it is.

I can’t imagine anything worse. People, when we say life in Israel is difficult, THIS is what we’re talking about. We already scrimp with water; chumus is next? I guess my daily chickpea sponge baths will be now be weekend treats.

On that note, I’d like to present the schedule for my North American fall comedy tour, known as “CHUMUSFACE!” Madonna had Blonde Ambition, U2 had ZooTV, why can’t I have “CHUMUSFACE!”? (Ech omrim “I just dated myself”? International media outlets, please note the exclamation point in the name, like in Wham!.) 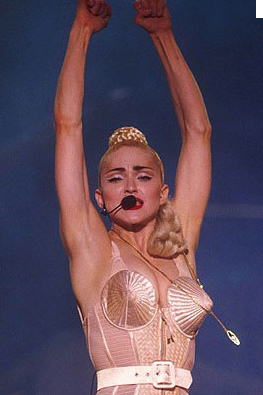 This is what I’ll be wearing tonight. 2 cones for 1 at the Mashbir.

Officially kicking off tonight, CHUMUSFACE! will be rocking young Jews in cities across North America. Well, truth be told, I don’t yet have any shows in Canada but I’m still open to it. If somebody wants to fly me to London on the way home, I can do that as well. Hell, let’s just call it my fall Western hemisphere tour. Who’s excited?

Here’s my schedule as it stands:

10/26: Wash U Hillel
10/27: University of Texas Hillel
10/28-11/1: Vacation at undisclosed location (I plan on checking into my hotel under the pseudonym Randal Shawarma)
11/1: UC-San Diego Hillel (I can’t actually remember who’s behind this one or not as I often just speak to a shaliach and then show up…when in doubt…”Hillel!” You never know, sometimes it’s “Hoyas for Israel” or something (ech omrim “Hoya”?))
11/2: UCLA Hillel
11/3: Santa Cruz Hillel
11/4: Berkeley Hillel
11/5: SFSU Hillel
11/6: Alcatraz Hillel (anybody paying attention?)
11/7-9: GA in New Orleans (no plans to perform but who can resist the professional Matza Ball? As always, it’s strictly formal so I’m putting away my leg warmers in exchange for my power suit and shoulder pads. Just one question: do I need a transformer for my Israeli curling iron or will it work just fine there?)
11/10: Family time. Let’s go, Texas, not too late to sign up for 45 minutes of falafel jokes.
11/19: Hunter Hillel, NYC
11/20: Israel Bonds, Philadelphia
11/21: Jewish Agency shlichim conference, Baltimore

After that? Turkey time with the fam.

Anybody looking to laugh from around November 15th-19th? Talk to me.

In the meantime, I’ll be shopping, doing my work for Fung Whodaya, and whatever else we do in this country (like eating Cinnabon 475 times a day.) I’ve already received regards from Israel for Target so I suppose now I’ll have to go and say hello. And when I do that, I might buy some shampoo for my tiny hair follicles (because just because I’m shaved, it doesn’t mean they don’t grow back. NOT BALD, DAMMIT! SHAAAAAAAAAAAAAAAVED!!!!!!!!!!!!!!)

And I might even buy Head & Shoulders just because I like products that I can’t find in Israel. I mean, I haven’t seen Head & Shoulders yet although apparently we do have something similar. 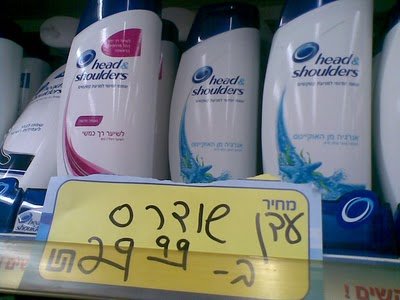 This has been brought to you by the CTI (Crappy Translators of Israel.)

See you on the road. Or in Target.