Yom Kippur Wrap-Up, Part I: How Do You Observe?

Posted at 7:19am on Sep 9, 2010 in Benji's Getting Serious, Jew Stuff by Benji Lovitt 0 Comments
Inspired by my idol Bill Simmons, I’m being nice to my loyal readers and splitting this into 2 parts.
Can you believe we’re already closer to Sukkot than we are Yom Kippur? How did that happen? And so much for my state of hunger. After just four burekasim, I’m about as full as Misrad Hapnim on a Sunday morning.

So as you may have already seen from my little video (nu, did you watch and see the surprise ending? I’m the M. Night Shyalaman of Jews. Mem Laila Shyla-manyak), I decided to go to Tel Aviv. I’m still getting used the idea of actually looking forward to Yom Kippur after growing up being bored out of my mind in shul. Especially after seeing me play on the highway, several people asked, “So did you GO to shul?” The answer? ba-RUUUUR! Since I haven’t actually explained it here before to my memory, here is my explanation of one of my favorite words, from this past Yom Ha’atzmaut post:

I love emphatically saying the word “ba-RUUUUUUUUUUUUUR!!!!!!!!!” It’s like “duh” with more raysh-es.

Well…without making this even longer than it’s going to be, as someone who is somewhere between chiloni (secular) and masorati (traditional) (to use the Israeli terms….I know I’m not dati (religious)) (if you can follow all these parentheses, you get a free chumus facial), my American Jewish roots are steeped in synagogue attendance. Way back when in the 20th century, you pretty much had to go to synagogue to be an affiliated Jew. Yes, we were bored; no, we didn’t know what the hell we were reading; and yes, I occasionally snuck in a book to read as a young boy because there was a better chance of me doing a backflip into chocolate shawarma than being entertained by the service….but that’s the way it was! And we liked it! Weeeee LOVED it!

Then I moved to Tel Aviv. Despite my laughing at Israeli behaviors all the time, I do feel that with every cultural difference, the happy and healthy medium lies somewhere in between. I enjoy good American customer service but I also enjoy Israeli flexibility. I don’t always like Americans refusing to think outside the box and I definitely don’t enjoy Israeli yelling. But something in the middle would be nice. I feel the same way about religious/spiritual observance.

Tel Aviv on Yom Kippur is UNREAL. Let’s start with the fact that you feel the Shabbat (and by that, I mean, the contrast between Shabbat and the weekdays) much more in Jerusalem than in Tel Aviv (whether you like it or not, if an alien came down from Planet Chumus-9X and had to choose the city where Saturday looks most different from Wednesday, he’d have to choose Jerusalem. This isn’t a judgment about which is better. I’m actually kind of partial to Shabbat in Gaza City.) I maintain that if you feel Shabbat ten times more in Jerusalem than in Tel Aviv, you feel Yom Kippur one HUNDRED times more in Tel Aviv (numbers are rough mathematical estimates). 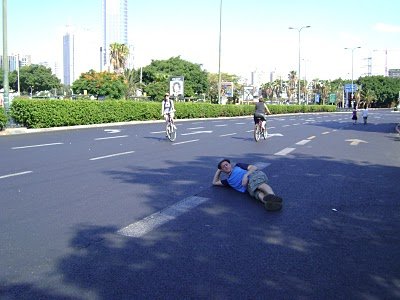 If anyone’s looking for me, I’ll just be chilling on Arlozorov…

I was in Jerusalem last year and don’t remember being too fazed. It felt like a ghost town. Much like, you know….Shabbat. In Tel Aviv, kids on bikes, dogs, and about 8 bajillion other people take over the streets. It’s amazing. But I couldn’t help wondering from my first year….what does this have to do with the actual meaning behind and intention of Yom Kippur?

I’ve had this discussion with a few people. One viewpoint is that “people celebrate it in their own ways and it’s nice for so many people to do something together.” My feeling is that if we all suddenly start eating sushi on Shavuot and doing hula-hoop contests, it could be really cool but what does that have to do with the Day of Atonement? Surely many of the people enjoying the incredible tranquility on the streets aren’t repenting, apologizing to others, repenting, or thinking about what they want to do differently this next year (especially the ones watching downloaded movies).

While I feel like my perspective is somewhat based on Jewish guilt, I guess it would be more correct to call it a sense of responsibility. I don’t want to judge or look down upon non-religious observance (especially because I also partake in it) but let’s just say that it wasn’t riding bikes that kept us surviving as a people for thousands of years. If G-d forbid, there wasn’t an Israel tomorrow (or more realistically, if Israelis move abroad), how long would the Judaism of that population survive? Probably not much longer than that of the average American Jews. I mean, what do parents here teach their kids about the holiday? “Well, Shmulik, on Yom Kippur, we ride our bikes!”

The problem is that many of these things that have kept us together for thousands of years, many people (including me) don’t particularly enjoy doing. Text study? Not for me. Discussing a dvar Torah? Yawn. I have tried, I just can’t get into it. But even if I haven’t grown up on an education which has turned me on to those things, I do recognize their importance to our people and continuity. Which also comes back to our nation and existence. To some people I’ve overheard saying shtuyot like, “Ahhhh….let’s just give Jerusalem back, who gives a crap?” Whether or not you like Jerusalem or mourn its lack of good nightclubs and fun secular stuff, let’s see how long the rest of the country survives without it. Silly argument (unless you enjoy swimming.)

My friend Molly made a good point to me this year: this is really more of a national moment than a Jewish one. When some Israelis say they are Israeli before Jewish, this is one example of why.

I don’t know what to make of all this. Religious observance and Jewish life is different from in the Diaspora. It just is. It has to be. I DON’T feel the need to go to shul AS MUCH as in the US but I would feel like something were missing if I didn’t go. By walking down to the Ayalon highway and being awed by the emptiness and the contrast between a normal day and Yom Kippur, it helps me feel the uniqueness of the day. As far as why it’s unique? I guess that’s for each individual to think about.

Is Jewish life in the US perfect or better? Not unless you think sitting in services bored without kavannah (religious intention) or an understanding of Hebrew is all that and a bag of bissli. I love it here, and I and most secular/traditional Jews would be lying if they didn’t admit that they love being able to be Jewish without doing religious stuff. But like standing in an orderly single-file line with impersonal people or dealing with line-cutters who are more real and deep, the optimal situation is probably somewhere in the middle.

Update: Somehow I failed to include that I went to shul, fasted, and apologized to several people. Oops.