While I may be a little more out of it than I used to be (thank you, living abroad and not listening to the radio regularly since selling my car in 2003….oh yes, and getting older), I’d have to be pretty out of it to not recognize the ubiquitous “Tik Tok” from Ke$ha. Aside from being a huge hit worldwide, it’s featured in a recurring sketch on Israeli comedy show “Eretz Nehederet” and also made an appearance in that Youtube video from Hebron.

Despite her international popularity, apparently something is still lost in translation with the spelling of her name. Here’s how it appeared on TV recently courtesy of a local cable channel. 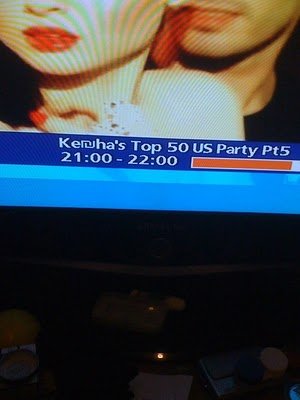 Here’s an example of why some things just don’t need to be translated. I thought about explaining it but that would of course make it less funny. Commenters, be my guest.

Thanks, Stefanie, for the pic!