Posted at 11:14am on Jul 7, 2010 in Once in a While I Just Have to Vent, This Aliyah Moment is Brought to You by the Letter Aleph by Benji Lovitt 0 Comments
JESUS CHRIIIIIIIIIIIIIIIIIIIIIIST!!!!!!!!!!!!! Good news, people-I’ve found a way to jumpstart my blogginess. I just stood in line at the Mr. Zol (מר זול) in downtown Jerusalem and now want to commit mass murder. Is this why Hamas is so angry?
This is a public service announcement: DO NOT SHOP AT THE DOWNTOWN MR. ZOL IF YOU CAN HELP IT. I THINK MY BLOOD PRESSURE JUST ROSE TO FIVE MILLION OVER ONE THOUSAND. Every time I walk in there, I immediately look at the check-out area to see what’s in store for me. (I would write “no pun intended” there if I didn’t currently want to throw a piano out the window.) If it’s too long, I’ll just leave before they ruin my day. I SWEAR ON ALL THAT IS HOLY, I JUST STOOD IN POSSIBLY THE SLOWEST ONE-PERSON LINE I HAVE EVER SEEN IN MY ENTIRE LIFE.
GOOD LORD! This woman ahead of me was pulling out large number of checks (to pay in tashlumim, “installments”; yes, we can do that here), she’s filling out forms the likes of which have never been seen on this planet, the cashier is trying to help her figure out what to do, then running them through some kind of stamping machine…. Rinse, lather, repeat.
This scene passed through my mind albeit five million times less funny.
REALLY, ISRAEL? WE’RE THE START-UP NATION AND WE CAN’T FIGURE OUT A WAY TO MOVE A SINGLE PERSON THROUGH A LINE IN UNDER TEN MINUTES BEGINNING AFTER HER ITEMS HAVE BEEN SCANNED????? WE DEVELOPED THE TECHNOLOGY FOR INSTANT MESSAGING AND WE HAVE TWEEDLE-DEE LEADING TWEEDLE-DUM THROUGH A GAUNTLET OF PAPERS AND FORMS AS IF SHE’S TAKING OUT A LOAN?
HOW MANY CONSECUTIVE TIMES CAN YOU *&%^ THINGS UP, MR. ZOL!?!? YOU ARE THE JOE DIMAGGIO OF BAD SERVICE! YOUR SUCKITUDE IS UNPARALLELED! 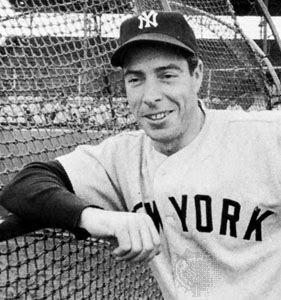 “Where have you gone, Joe DiMaggio? A nation turns its lonely eyes to you….”
(He’s stuck in line at Mr. Zol, find a new hero, suckers.)
It was so bad, I was almost laughing out loud. I looked around for hidden cameras. The woman behind me said that they should provide seats for us to rest on. While I considered just leaving my items, I just had to know how it would all end. Eventually a cashier opened another lane but since I was the FIRST ONE WAITING in my line, I didn’t want to move after three other people rushed to stand in line. So I watched person after person check out before me.
It was incredible. The check-out that would not end. It was like that 10 hour Wimbledon match. Babies born while I entered the store are now being released from the army. I migrated my blog to WordPress and back to Blogger since getting in line. I could have sworn the temple was rebuilt and destroyed while I was trying to pay.
OH MY G-D. Do you ever look to the people around you in such disbelief, as to say to them, “IS THIS REALLY HAPPENING? AM I DREAMING? IS NO ONE ELSE FAZED BY WHAT IS HAPPENING RIGHT BEFORE OUR VERY EYES????” Usually in this country, it happens when I hear Right Said Fred’s “I’m Too Sexy” on Galgalatz and I want to confirm that, yes in fact, I AM HEARING RIGHT SAID FRED’S “I’M TOO SEXY” ON GALGALATZ. Not this time.

Although this woman may have thought she was too sexy to let me pay for my damn groceries, let me assure you, she was not.
And, I’m sorry (that’s what we Americans say when there is a 0.00005% chance we might offend someone….whether or not we’re actually sorry is irrelevant), but can they get some different cashiers in there? I know the analogy’s been overused over the years but a few of them grew up somewhere just outside of Mos Eisley. The type of person who works at this Mr. Zol has clearly grown up with SUCH a different series of experiences and expectations in their lives that to even express disgust would be met with a blank stare. Let’s put it this way, I just brought it up with my roommate and this happened:
Me: (relating the hell I just experienced)
Roommate: “Which woman did you get?”
Me: “_____. The weird one, you know her?”
Roommate: “She has those weird, wonky eyes. Awww shame, she’s so sweet though, she always says Shabbat shalom.”
Me: “Would you want to take out a bank loan from her?”
Roommate: “No.”
Me: “And, yes, this is now going on my blog.”
When your apartment KNOWS THE NAME OF THE CASHIER, LET’S JUST SAY IT’S PROBABLY NOT BECAUSE SHE JUST WON “EMPLOYEE OF THE MONTH.”
There was nothing I could do, I just had to smile, laugh to myself, and try to channel that emotion into a blog post. If this blog post does anything at all, if someone half a world away somehow comes across it in a year, setting off a “butterfly effect” chain of events which somehow alters this country in a positive way, it will have been worth it. And if it doesn’t? Well….you still suck, Mr. Zol. Big time.
In conclusion: friends, Romans, countrymen, lend me your ears. STAY AWAY FROM THE DOWNTOWN MR. ZOL IF YOU CAN HELP IT. YOU SUUUUUUUUUUUUUUUUUCK, MR. ZOL! YOU SUCK! YOU SUUUUUUUUUUUUUUCK!!!!!!!!!!!!!
AAAAAAAAAAAAAAAAUGH!!!!!!!!!!!!!
This pro-Israel message has been brought to you by Nefesh B’Nefesh and the Jewish Agency for Israel.