What Goes on At HER Seder???

Hello, everyone-did you have a good Passover? I did. I definitely learn something new every year, for example that chilonim (not religious) in Israel don’t know any more than chilonim in the States. This line translates into any language: “Whaddya mean we have to keep going after the meal???” I tried to get an answer to this one but nobody had any clue: have you been to a Seder with lettuce as the maror? Seems like you could get food more bitter than that unless iceberg lettuce makes you recall the bitter times that our ancestors were vegetarians. Not only that, the Seder plate had a special place for chazeret which apparently is Hebrew for horseradish.

I learned over matza pizza at Fun Joel‘s that in rabbinic times, people used bitter lettuce as maror and the tradition stuck. Ok, so why the addition of chazeret as well? Let’s go, my religious readers, step up to the plate and give us some answers. And no, “chazeret” does not come from the word “pig”.

I also learned that people make the same jokes at Seders all over the world. “Hey, _____, why don’t you read the paragraph for the SIMPLE son???” Yuk yuk yuk… There is a good chance this person has just been waiting all year to deliver this genius line.

And I’m not sure what it means exactly that we were delivered from bondage but the answer might lie within this nice magazine. 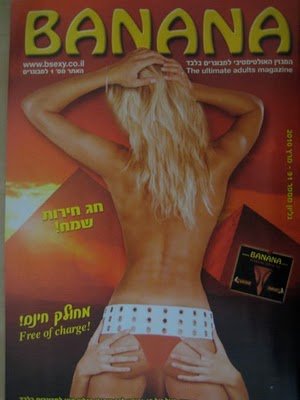 Yes, it actually says “chag cheirut (freedom) sameach!” on the left.
Israel: Where Even the Smutty Magazines are Jewish

Passover’s over, only 12 days till Yom Haatzmaut! You know what that means….pay real close attention to this blog. See you soon….