Can you forgive me, my loyal readers? I know I’ve been busy but only once in the past month or so have I managed to write. I guess every writer goes through a block, no? Feels like going to the gym. The longer you stay away, the harder it is to return. You know…for people who actually go to the gym. Once upon a time, a wise writer and blogger advised me that it might be smart to not focus TOO much on something that doesn’t directly generate income like, ahem, blogging. While I can definitely say that this little creative outlet has definitely led to my making money along the way, I somehow took it to an extreme and knocked it to the bottom of my to-do list. That’s unfortunate. Balance is important. Balaaaaaaaance.

I should have listened to this guy. He seems to know what he’s talking about.
He even has a blog category for G-d’s sakes.

So what can I tell you? I’ve been doing some shows, some SEO stuff, a bit of Jewish education for MASA, some more SEO stuff, and who knows what else. Trying to catch up with friends. Thinking about writing more.

The other day, during a catching-up session with my friend Yoav, we met for lunch at a restaurant. I ordered pasta. Yoav ordered the salad. And the salad. It seems that his chicken salad with lettuce and tomatoes also came with a salad with lettuce and tomatoes. Seeing the two side by side was hilarious especially and of course only because no one on the waitstaff seemed to have any clue of the irony. Actually, the fact that they created the situation probably removes the irony. I guess it would be more accurate to call it ridiculous. I was kind of hoping my salmon alfredo would come with a small salmon alfredo appetizer but sadly, it did not. 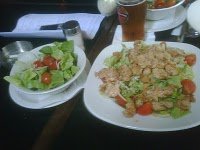 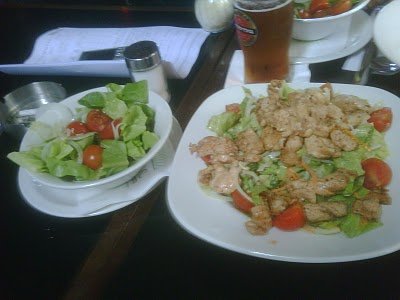 Even though it took me at least five minutes to put a smaller picture next to the bigger picture, it was totally worth it.

Here’s to salads, salads, blogging, and blogging. I hope this is the beginning of an inspired return. I need to go find some distasteful t-shirts to photograph or something…