Hello from the Calgary Marriott! Just a quick update with no time for editing…hope I don’t accidentally write that I’m a hermaphrodite or something.

I got here yesterday and am off to Edmonton in a little bit. I arrived yesterday afternoon to do a gig for the Jewish students. While that didn’t go off exactly as planned (it’s “Reading Week” in Canada which means the students all have a week off of class to catch up and study, which basically means it’s actually non-reading week which basically means only two students came which basically means we just talked about Israel and hasbara on campus), I got to take part in the weekly Monday night comedy night at a bar downtown. Seeing that I live in Israel and cater to, you know, Jews, I never get to make, you know, non-Jews laugh anymore. I don’t even remember more than one time offhand in the last several years that I’ve found my way into a comedy club in North America (that’s for you, Canadians…really hard to keep myself from saying “America”) doing “normal” material that’s, you know, not about Ben-Yehudah Street or whatever. When you make the non-Jews laugh, you get to say, “hey, I really am funny! You know, about stuff other than chumus.”

B’kitzur, my contact here got me into the lineup and invited out some Jewish students and community members. I was honestly pretty nervous trying to figure out a way to come up with 15 minutes of stuff and performing in front of a “real” audience and the MC introduced me as a special comic visiting from Israel so I didn’t want to disappoint and make us look bad. It ended up going great. I did my typical airline stuff changing it a bit and explaining Israeli security so if anything, a bunch of Calgarians walked away now knowing not to mess with the big bad El Al people. I also did a bunch of stuff from the old days that I hadn’t really done in a few years. When in doubt? Win the crowd over by saying about the big hockey game, “don’t worry, Canada, even though you lost, we’re still fat, stupid, and don’t have health care.” They seemed to like that. Self-deprecation is good stuff.

Afterwards I hung out and talked to a few of the people who had never been about Israel for a few minutes. All in all, everybody left happy and having seen a real-life Israeli person (or at least half an Israeli or whatever the hell I am.)

Ah yes…and this was funny. One comic said to me, “you know, most people think that place is just one big war zone.” Well, funny that you mention that….let me tell you about a little website…

By the way, I just had my first soy hafuch in a week or so. Thank you, Starbucks! Ok, gotta run….more later, I hope. 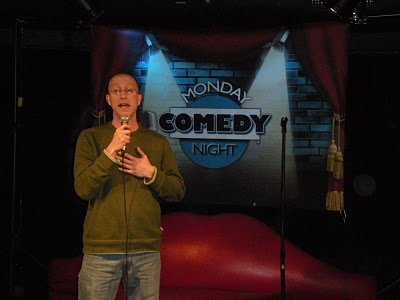 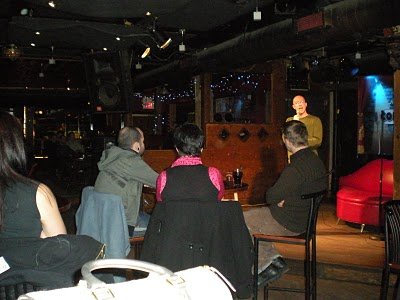