Do you like to laugh? Would you like to help an oleh in need? After successful comedy tours last February and November, I’d like nothing more than to come back to North America next month for more of the same. (That was for you, Canada, I’m just dying to visit and spend some loonies and twonies.) To make this happen so I don’t have to trade my blog for food stamps, I’m asking you loyal readers for help.

If you’d like to see me in a Federation, Hillel, or chumus bar near you between February 18th and March 1st, I invite you to do one of a few things:

2) Send this link or the information below to any contacts at Federation young adult groups, Hillels, synagogues, or any other Israel-related groups such as AIPAC, Israel Bonds, or Taco Bell (just making sure you’re paying attention. Although if you have connections at Taco Bell, I’d love to know about them.)

If you have any questions about pricing, dates, etc., contact me directly rather than commenting below. Thanks a lot and hope to see you in real life.

Looking to bring a great program to your community?

Following up on his successful eleven-show tour in November, American-Israeli comedian Benji Lovitt will be back in the US between February 18th and March 1, 2010. Benji’s hilarious show about life in Israel is a must-have user guide to life in the Middle East for anyone considering a visit to the Holy Land.

“Benji’s show was hilarious and gave an inside look at real life in the Middle East. More than that, the audience left feeling invigorated and connected to both Israel and its people.”
-Karen Garfield
Dallas Office, State of Israel Bonds 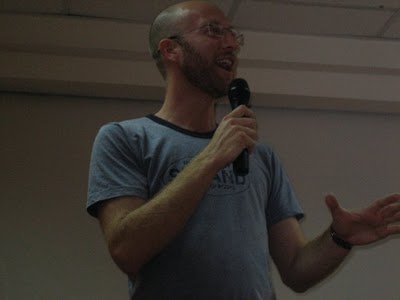 Benji has performed for numerous groups including Birthright NEXT, Hillels, the Jewish Federation’s General Assembly, Israel Bonds, the Conservative movement’s Rabbinical Assembly, and many others. His perspectives on life in Israel from his award-winning blog What War Zone??? have been featured in the Jerusalem Post, Ynet, Haaretz, the Jewish Daily Forward, PresenTense Magazine, and more.

If you are interested in a show for your organization, please reply to this email.

More about Benji.
List of groups Benji has performed for.
Watch Benji in action!

Please forward this to 3 people.