Come On, Birthright-It’s Time You Hired Me to Blog

I wonder if they have a Google Alert set up….

Shalom from Eilat’s Cafe Hillel! Who needs the beach when you’ve got free wireless and cafe hafuch? While my 41 chanichim and co-staff are soaking up the rays on this Shabbat morning, I’m catching up on three days with no internet. Wait, so you mean the world continues when you’re offline? Memories of summer camp with no access to news…

So here’s a quick recap:

Things going great. Ech omrim “thank G-d I have 22-26 year olds and not college students?” How refreshing to not have to deal with barfing American youth but then again, I would never have agreed to staff that age group anyway. And since it’s an outdoors trip, it’s a self-selecting group which doesn’t complain and loves everything we do, and by the way are also totally respectful and supercool adults. Truthfully, the person most likely to complain would probably be the oldest one (cough). Everybody got that? Good, let’s move on. (And if he or she doesn’t blog after ascending Masada via the snake path, it’s probably because he’s in traction in Ichilov.) 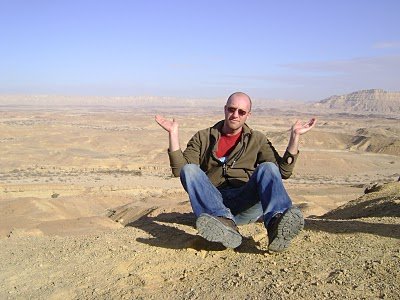 Beautiful, ain’t it? Tomorrow (Sunday), Dead Sea and hiking. Monday, Masada and long drive north to the Golan. Another post coming later this week, I hope. Hope you enjoyed!