I love shawarma. Love it! It’s not just a rumor that I won the shawarma-eating championship in 1982. In what historians have called either “The War to Settle the Score” or “The Pita that I Gotta Eat-a”, I failed to repeat in ’83 following a bad chumus injury and have been upset about it ever since. 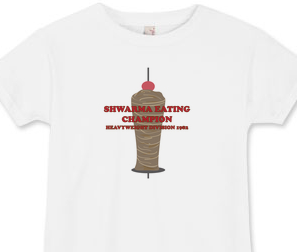 What, you thought it was just a joke?

Anyway, we can all agree about the value of a good shawarma, right? Not convinced? Just ask Hadas and Tzachi Medina.

According to this article in Maariv’s historically badly-named website NRG, this happy couple was minutes away from getting married until realizing that the ring was missing. Just as they were about to lose their minds, a waiter found the ring in….are you ready?….the shawarma. Now that’s some good value.

You see people, I wasn’t messing around when I Tweeted this December 15th:
If you liked it, then you shoulda put techina on it.

Eat your heart out, Beyonce.

Hat tip: Jameel at the Muqata!