A Friday pre-Shabbat post??? Crazy! I know, I know, just waiting for the dude to get hot. (Ok, to prevent any rumors from flying around, what is the appropriate English spelling for the hot water heater? Dude? Dood? Dooooooooooooooooooood.*)

We’re just hours away from Chanukah/Hanukkah/Chanukka/Chumusface and I have yet to partake in a single sufgania. Seems the big topic of conversation centers around how

I’m allowing myself somewhere between one and three, and that’s it. Or did you forget? WE’RE MAKING CHANGES!

So this is an image which appeared in my inbox yesterday. All I have to say is that I saw the big, fat “sham” and thought, “Thank G-d I’m in Israel.” 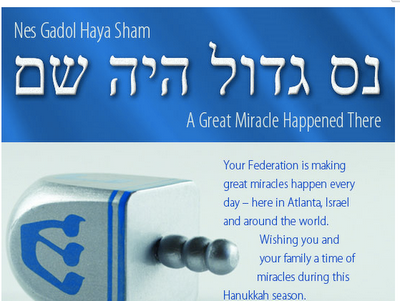 And even though I’m probably the last Jew on the planet who hasn’t forwarded this around, here is the Nefesh B’Nefesh CChannnnnukuh greeting. If I had an ars for every person who argued about whether or not this is actually a “flash mob”, I’d be Bat Yam. Either way, it’s clearly one of the biggest Jewish videos ever with about half a million views already. And if you look closely (or at all), you might even see Some Dumb Oleh dancing in the middle.

From downtown Jerusalem, have a חג חנוכה שמח!

*Dude, where’s my dood? A post when I was young and foolish.