What Really Goes on at the Gilad Shalit Tent

As you may have seen from my Facebook status, I volunteered at the Gilad Shalit tent yesterday for the second time. If you haven’t seen it, the protest/awareness tent has been set up outside the Prime Minister’s office for….how long? At least a year, yes? There are volunteers there from morning till night, seven days a week, manning a table while collecting signatures on a petition with the number of days Gilad has been in captivity displayed above.

The tent is located at the beginning of Aza Street which leads from King George St to the heart of Rechavia. If you live in the neighborhood or if you’ve walked to Rechavia from downtown 47,000 times like I have, you’ve passed it. And if you’re like most people, you probably signed your name once and then proceeded to walk right by every successive time. Which I guess is ok because what else can you do?

Well, a couple of months ago, when walking by, I was compelled to grab a piece of paper with an email address to contact to sign up for a shift. I’ve never been someone who particularly enjoyed volunteering but I have the time and flexibility and it felt like a meaningful and pretty easy way to take part in an important cause.

So yesterday I show up again after somebody brings to my attention that, in light of recent news, this might be my last time there. Wow. So much for weekly volunteering. 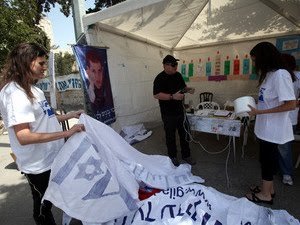 Photo credit: NRG, or whatever Maariv calls their online version. Dumbest name ever. If anyone steals my pictures, you are to credit me as PYT.

A few passersby, a lot of media, and just being present, keeping him in the collective awareness. That’s pretty much how it went down. Two hours later, I was home feeling good about my experience. While I hope to sit there for another shift, I also hope I don’t. You know what I mean. Let’s keep our fingers crossed.