I was in Haifa last week. Ahhh, Haifa. Nice place, actually. Have I written about big city snobbiness? I lived in the City for three years immediately before living in Israel. (I’m already going to digress. Once I lived there, I instinctively started calling it “the City”. I wouldn’t be surprised if non-NYers or non-Americans found that annoying. I’ve never talked to anyone about it before but it’s a bit pretentious, no? THE city? How does NY get claim to it? What about other big cities, if not older ones? Maybe it makes more sense while talking with other NYers more than with general people. It doesn’t bother me but I’m sure it bothers somebody. Now I’m thinking like a non-American. Anyway, from this point on, I’m calling Kiryat Malachi “Ha City.”)

So when I lived there, I was very turned off by the New York snob who didn’t acknowledge life outside of the city. “You can’t get a good cup of coffee outside of the city.” Are you serious? How about anti-psychosis medication? I was more than willing to respect if not agree with the viewpoint that NYC is at least the greatest city in the States but the corollary that no other city is worth living in or visiting or has any merit is crazy talk.

Here I am living in Israel now. If you’re an oleh, or at least an oleh in your 20s or 30s, or a single oleh in your 20s and 30s, you’re moving to Jerusalem or Tel Aviv. That’s it. I’m talking, what, 95%, if I can make up a number? I’ve only been here 3 years but from where I’m standing, it’s easy to have some a bit of a bubble mentality and sometimes have it hit me, “wow, I almost sound a bit snobby”. I remember driving through Tiberias 3 years ago, thinking “who LIVES here????” So when I go to a place like Haifa, it’s a bit bizarre to realize I’m in one of Israel’s cities which is neither Tel Aviv nor Jerusalem, and one which I don’t know at all. I wonder, “what are their lives like? what do they think about X, Y, and Z? are they different from me?” If that last question sounds silly, Israelis say kibbutznikim are “different” (haven’t exactly figured out how) and someone just told me yesterday that people in the Galil are different and more laid back. I should say that I do acknowledge the merits of living in other places, it’s more that I have a hard time putting myself in their shoes and sometimes am unable to imagine living there.

From the small amount of time I’ve spent in Haifa, I like it. It’s pretty, green, the views are great, and it’s just new to me. They even have different cafes, more than just Aroma, Cafe Cafe, Hillel, etc. I went to not one, but two branches of Cafe Greg. Am I the only one who thinks that’s a weird name for a cafe in this country? That’s appropriate, I guess in the same way I’d expect to drink coffee in Cafe Steve and Beit Jerome.

Anyway, I had a brownie which wasn’t bad but probably not worth 33 shekels for which I could have gotten a meal. What’s IN a 33 shekel brownie, cocaine? It’s possible I got the wrong receipt since they just wrote “ארוחה עסקית”. That’s my new business plan: start an overpriced restaurant, just write “food” on the receipt regardless of what they order, and charge 90 shekels for everything.

At least it was a quality place as evidenced by the bottom of the receipt. Remember, folks, in Israel we read right to left. Or something. 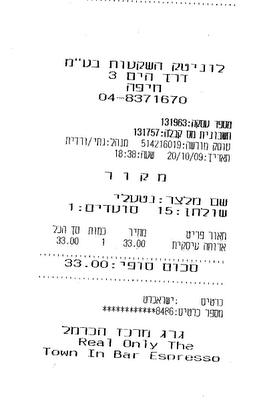 As always, my biggest question is “do they even know???”

One more thing: my male friend (not the ONLY one but one of them) is looking to rent out his spare bedroom. He’s a good guy, you can trust me. After all, I am “real only the town in blogger”.