That’s right, people, it’s time for a Tweet-up! The last couple I attended were so much fun that we’ve decided to do another. Sponsored by Jewlicious, Tachl!s, JewTube, the JTweets FB group, some dumb oleh, The Artist Formerly Known as Prince, Billy Bob Thornton, and the Partridge Family, you won’t find a more fun engagement Sunday night.

We don’t need no stinking bars! We’re doing it Jerusalem-style once again, getting together in the shuk. Come out at 8:30 PM; we’ll be hanging at Cafe Aroma in Machaneh Yehuda. If you want something a little stronger than coffee, bring your own or pick something up at the makolet around the corner. And if you want to drive, you can park in the shuk itself. How cool is that? 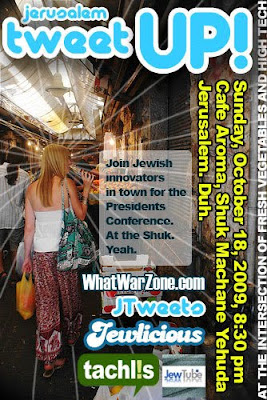 By the way, have you ever tried to explain a Tweet-up to someone?

Friend: “Let me guess, you go to some bar with people you’ve never met and stand around fidgeting on your cell phone. (silence) What, seriously???”

Well, not exactly. Israel’s a small country. If you’ve been, you’ll reconnect with online and offline friends. If you’ve never been, I promise you’ll have a good time and you’ll surely see someone you know. Even if you don’t have a Twitter account.