Israeli Pizza: This One Takes the Cake….or the Slice

There’s a distinct something in the air, my loyal readers… I’m not talking about the new year, that’s tomorrow. Today? Pizza. Mmmm, pizza. In Jerusalem, I like Big Apple and Agvania. Tel Aviv, Basilicum and….Agvania!

Whether it tickles your fancy or taste buds, let’s keep the tickling in an appropriate place. I don’t want my pizza interfering in, ahem, more personal areas. Not everyone feels the same apparently.

You know the rectangular piece of cardboard that comes with your slice of pizza? Ever turned it over? If you did, what would you do if you saw this? Read the small, red print… 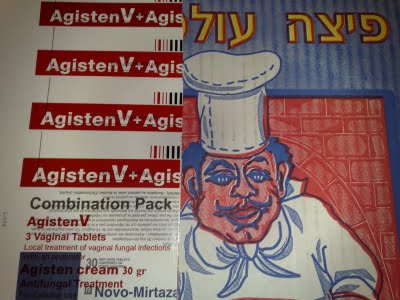 B’IMA SHELI, WHAT IN THE HELL IS IN THIS PIZZA? And how in the hell did this happen?

Here’s how it must have gone down, from my friend Joel at the blog Religion and State in Israel.

Baruch is a middle man between drug companies and pharmacies. Baruch supplies AGISTEN – “LOCAL TREATMENT OF VAGINAL FUNGAL INFECTIONS” to his buddy at the Superpharm. Somehow Baruch gets all these extra boxes of Agisten that have not yet been assembled. He has no idea why — and no idea what to do with them. In fact, he probably has been throwing them out for years.
He’s having a few beers while watching the Betar Jerusalem game with his buddy Chaim, local pizza store manager.
Chaim: “Achi, I’m paying 100 shekels for those plain cardboard pieces I use for pizza.”
Baruch: “I can get you the same cardboard for nothing.”
Chaim: “Ehhh….whats the catch?”
Baruch: “It’s plain cardboard on one side only.”
Chaim: “So what’s on the other side?”
Baruch: “Ayn li musag, nothing important. Who cares?????”
Chaim: “Just tell me what it says.”
Baruch: “Do I know? It’s all in English.”
Chaim: “I’ll take ’em!”

And here’s another link to my new fan page if you want to join.