I love Israeli food. LOVE IT. It’s healthy, it’s delicious, and have I mentioned the vegetables? Holy falafel balls, I ate SO MUCH GOOD CRAP my last few weeks in the States and finished every other meal with some combination of regret (“What have I done???”) and hangover (“Whooooooooooaaaaaaaa (hand on stomach)…..I am NEVER doing that again.”)

I went to Fuddruckers for lunch one day and tried to be healthy by ordering the bison burger. Unfortunately my efforts were thwarted by the cashier who casually asked me if I wanted to add mushrooms, bacon, cheese, a pinecone, and broken glass. Without even processing the question and the consequences of saying yes, I said yes. Between the burger, fries, and beverage in a glass the size of my first Tel Aviv apartment, I entered what some might call a food coma (really more of a food getting-hit-by-a-car.) If you had opened my heart and digestive system, you probably would have seen something resembling New Orleans after Hurricane Katrina. The next time missiles fall down on Sderot (חס וחלילה, G-d forbid), the IDF should go into Gaza and make them eat the one-pound burger at Fuddruckers. Of course then the world outcry would be warranted.

Anyway, while I loved eating back-to-back bags of real Doritos at the airport and unbelievable Tex-Mex in Austin, my body is glad to be back in a place where I don’t need as much self-discipline to eat a vegetable (just one!) or be at least a little healthy.

And seriously, there’s some weird stuff over there. I’m not saying the Jerusalem Mix isn’t nasty (couldn’t find a link, anybody want to explain?) but at least we KNOW what’s in that. WHAT IN G-D’S NAME IS THIS??? 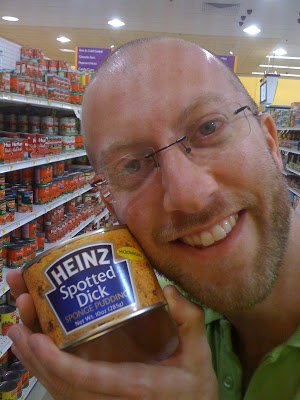 Heinz, you were doing JUST fine with the ketchup.
Whose brilliant marketing idea was this?

Caption contest, let’s go. Best caption to that picture gets a cup of coffee.