Holy Crap, You Start a Blog and Next Thing You Know, You’ve Been Living in Israel for 3 Years

Posted at 5:46pm on Aug 8, 2009 in Benji's Getting Serious, Israelis Make Me Laugh, This Aliyah Moment is Brought to You by the Letter Aleph by Benji Lovitt 0 Comments

Anybody know where they were three years ago this moment? I do-on a chartered Nefesh B’Nefesh flight from JFK Airport to Ben-Gurion, not really knowing what was in store for me. And if you had asked me on August 9th, 2006 where I saw myself in three years, I don’t know what I’d say. I certainly wouldn’t have guessed Aroma on the Upper West Side sporting a shaved head and blue jeans despite the oppressive humidity. (NOT BALD! Shaved.) I would have expected and hoped to celebrate three years, that milestone after which your NBN financial assistance vests, IN Israel but does aliyah really ever unfold as an immigrant expects?

After six weeks at summer camp and three weeks traveling around the country seeing friends, I have answered the same questions countless times: “So how is it? Are you going to stay forever? Are you and Esti Ginzburg really a hot item?” Unfortunately I haven’t been in Israel for 2 months which makes the questions hard to answer from anything but rote memory. That is, I can recite to you how Israel has been this last year but I’m not actually connected to the answer as I’m describing a physical and emotional place that I’m no longer in.

So instead of an “aliyaversary” celebratory post looking back at three years, you’ll just have to bear with me for a few more days till I get home. Believe me, I’m looking forward to a return to our regularly scheduled program as much as you are. Until then, here’s a reminder as to why I moved in the first place and a few words from the plane ride over.

To all of you who have read and/or commented over the last 3 years, thanks for giving me reason to keep writing. This blog has brought me a lot of pleasure, pushed me to be creative, has opened a lot of doors, allowed me to meet a lot of great people, and has been fun as hell to write. And of course, has given me a new level of appreciation for Israeli t-shirts. I’ve spent much of the last few weeks listening to “Off the Wall” and “Thriller”, watching Youtube clips, and putting the man’s life into perspective. As evidenced by the graphic below, much of the Middle East is doing the same. So let’s all share a moment of silence for the King of Pop himself who apparently is Israeli….MICHAL JACKSON (מיכל‎)! 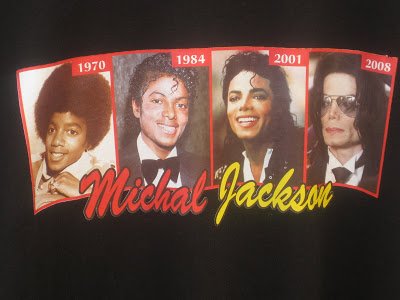 I’m fairly certain that I’ve seen at least three of these people at Shuk HaCarmel.