C’mon, I Know You People Have Hangovers in This Country

Hey, posts on three straight days! Could I be finding my mojo? If the answer is yes, I probably downloaded it on Limewire, along with 8 bajillion Madonna songs in preparation for tomorrow night’s concert. With her obviously doing more than visiting the Kotel and sitting in her hotel room all day, I honestly can’t even imagine where celebs like her hang out here In New York, I can envision a million and one places in swanky clubs, the likes of which I will probably never see.

But in Tel Aviv? We just don’t have the same level of high-end bars and restaurants (who does?) What are the nicest bars in the city? I can’t see Madonna partying at Lima Lima or something…. What an odd vision. Let’s just say if I happen to run into any combination of her, Justin Timberlake, Ashton Kutcher, and Demi Moore drinking coffee on Rothschild, I will not play it cool. There’s at least a 20% chance that I may try to coerce them into saying “I love What War Zone!” into my camera. The fact that I’m even writing about this means that I’ve probably lost my mind. But it’s almost 1 AM so let’s go with it. (Truthfully, I could give 2 falafel balls about Ashton and Demi…)

Finally, I hope Madonna sings her anthem to South Tel Aviv: “Don’t Cry for Me, Florentina.” (Yeah, I know I’m cross-posting here but that one was gold.)

So for the amount of money I spent on this ticket, I should probably go into savings mode for a few weeks. Good thing I saw some of the must-see movies in the States this summer, including the breakout comedy of the year, “The Hangover.” Any guesses as to what this movie’s called in Hebrew? “HaHengover? Deh Hangover? Yoter Meedai Alcohol?” Did you forget that Israeli movie titles are often free-standing sentences? 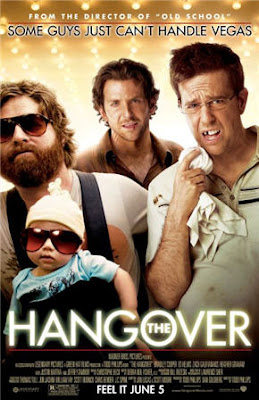 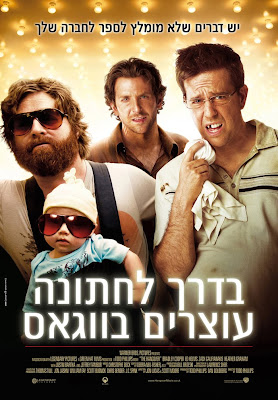 How about “On the Way to a Wedding, Stop in Vegas”?
They just revealed like half the movie.

And why exactly did they decide to change the tagline from “Some Guys Just Can’t Handle Vegas” to “There are Things That are Not Recommended to Tell Your Girlfriend”? Did someone decide that the first one doesn’t make sense here culturally? Was this a strategic writing decision to change it since they had already used the word “Vegas” in the title? I need answers.

What are they going to call “Funny People“? “People Who Try to Make Other People Laugh and Their Crazy Hijinks”? I need to read a book.