Dusting Off the Blog (How I Spent My Summer)

It loses something, don’t it?

Hey, guys, did I miss anything? About seven weeks later, I am back in the real world, home from summer camp. Well, not Israel home, but at least somewhere I can get a cappuccino. And if I haven’t raised this topic before, it’s time to get something off my chest: I have no idea what the difference is between a cappuccino and a latte. (And you might as well throw coffee, espresso, and whatever else into the mix.) Don’t they both have coffee plus steamed milk? Do we even have both of those in Israel? All I know is that I haven’t had a real cafe hafuch in seven weeks and I’m starting to fade like Marty McFly in the photo just before George punched Biff. 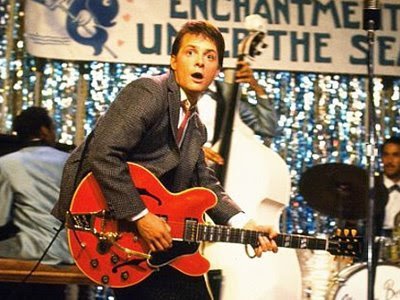 “This is heavy. Call Aroma!”

So what can I tell you? You already know I went back to Camp __________ as I did in 2007, this time in a more senior position. A couple of people, clearly not graduates of sleepaway camp, actually asked me if I was going to be a counselor living in-bunk. How many ways can I say this? Umm, no. Aleph, I’m about 15 years too old, and bet, next time a thir-….twenty-nine year old calls a sleepaway camp and offers to sleep in-bunk, please notify the authorities.

I worked as one of the camp’s two rashei machaneh (heads of camp), basically the most senior members of the staff who aren’t full-time employees whose job it is to supervise the merakzim (unit heads who in turn supervise the counselors). It’s a management position fairly removed from the kids so unfortunately I wasn’t able to spend as much time talking about life in Israel as I did two years ago.

What can I tell you? B’kitzur, I slept little, laughed a lot, and spent too much time putting out fires and getting caught up in logistics rather than doing education. In the words of a good friend and mentor, the classic mistakes that every single first-time rosh machaneh makes. Now, the good thing about working both sessions at camp is that although you don’t want to consider the first one as “practice”, you do get a second chance to do your job and hopefully do it better the next time around. Unfortunately, my position doesn’t exist second session so even though I spent a lot of time thinking about how I could stay for the rest of the summer, at some point I accepted that I’d just have to leave with the yucky feeling of unfinished business, less than the desired warm and fuzzy camp feeling that you’d like to leave with. But such is life when you’re not the 18 year-old in-bunk counselor.

I did learn a few things this summer though. One of them was that even when you have just a so-so experience at summer camp, in a lot of ways, it still has a lot over the real world. Non-stop laughing, getting closer to people in 48 hours than you might in 48 days, and other stuff that just doesn’t convey through a blog post. Definitely a special experience. 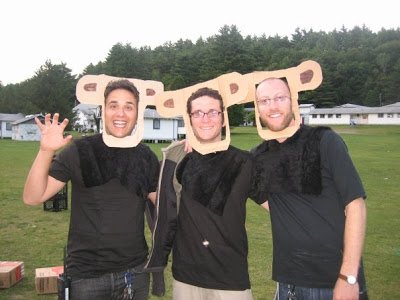 Ok, I just did some research and apparently I’m the only one on the planet adhering to the aforementioned internet policy including people more senior than I. Mah ani, freier? Here’s one of the few pics taken of me. Also, if I told you that one of the other two people in this picture shlepped a squeegie all the way from Israel just to clean his floor, would you believe me? Of course you would. (Thank goodness, he brought coffee as well.)

Here’s one more picture to leave you with before I get some sleep. If it doesn’t get the company lawyers on me for posting, it will at least make a few people vomit. Without further ado….camp sheets. (What, you expected me to bring my own all the way from Israel?) 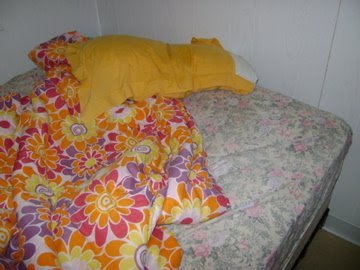 Do not adjust your screen. These are actual patterns.

So I’m back with a few more things to share in upcoming posts. Hope you missed me during our little vacation. And with that? Shabbat shalom and laila tov.