Boker tov, all-did you have a good long weekend? Not Memorial Day….Shavuot and Shabbat. We don’t get many of those in Israel so we have to enjoy them. I heard someone say yesterday, “Oof, no holidays for a long time.” What, Tisha B’av doesn’t count? Here’s everything you need to know about Shavuot from one of my Tweets: “In Israel, Yom Haatzmaut is to meat as Shavuot is to dairy. At the end of both, I want to vomit and sleep.” More cheesecake anyone?

So apparently I failed to mention that I’m flying to the States in four days to work at summer camp. Between Facebook, Twitter, email, blogs, and more, who can stay on top of everything? B’kitzur (in short), I’m spending six weeks at _____________* as I did as a kid and most recently two years ago, working as one of two rashei machaneh (did you like that smichut? BAM! Or how about this? “Rosh machaneh”s.) I’ll be helping run the camp and not sleeping much.

Anyone know how many times I found time to post two years ago? Twice. Hmmm…. Looks like it’s Twitter or nothing. We’ll see what happens. Thus, the effort to write a few things before I go.

Here are a few unrelated newsy items which have come across my desk in the past few weeks. Thanks to Joel at Religion and State in Israel, Tony, and Mort for your appreciation of ridiculousness. Here we go….

Sorry, no mannequin pictures. However, we do have a family-friendly picture of “Bob Sfog”. Like many immigrants, he apparently put off his first dentist visit. 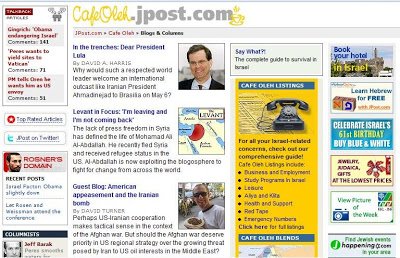 Time to pack and clean my apartment. Enjoy.

*After a few hours, I went back and deleted the name of the camp. It’s 2009; camp has an “internet social networking and blogging policy” and I didn’t get their permission to use their name. I’m such a good rule-following American.