You Wanted It?…YOU GOT IT! ”61 More Things I Love About Israel!”

Posted at 7:44pm on Apr 4, 2009 in Benji's Getting Serious, Culture, I Love This Place, Israelis Make Me Laugh, Jew Stuff, Now I'm Just Being Silly, This Aliyah Moment is Brought to You by the Letter Aleph by Benji Lovitt 0 Comments
Inspired by last year’s “60 Things I Love About Israel“, without further ado, here are 61 more things I love about Israel. (We made Jpost again this year….could I just ask everyone to post comments together on the Jpost page here instead of on this blog?)

1. I love that even though I may not have spoken with someone since the Ben-Gurion Administration, he will call me to check that I have somewhere to go for Passover Seder.
2. I love how you can bring your dog into any cafe to walk around and no one bats an eyelash.
3. I love the social norm that allows us to double-dip in peace without neurotic fear of contracting the West Nile virus. Take your Purel bottle and stick it somewhere. (Despite the events of this week.)
4. I love that you could take a homeless person with no marketable skills, put them behind the counter of Aroma, and they’d immediately be qualified to make a little foam heart in your cafe hafuch.
5. Mirpeseot. They’re cool.
6. I love that I visited Dracula’s castle in Transylvania, ran into an Israeli, and within 2 minutes realized we know someone in common. That could only be cooler if she were in fact a vampire and her name was Count Shawarmula.
7. I love tsofim, the Israeli scouts. I swear, these little MacGyvers can take wheat, some duct tape, and a falafel ball and make a nuclear reactor.
8. I love the magical phrase “yiyeh b’seder”, the Economica of the Hebrew language. What can’t it handle? Flat tire? Failed test? Take two “yiyeh b’seder”s and call me in the morning.
9. I love the peacefulness of Shabbat in Jerusalem. So quiet and relaxing. I can sit on my tuchus all day and not feel guilty.
10. I love how the smallest, least professional-looking chumusiot serve the best tasting stuff. Within 7.2 seconds of your placing an order, they’ve scooped, spread, sprinkled and created what I like to call “beautiful goodness.” 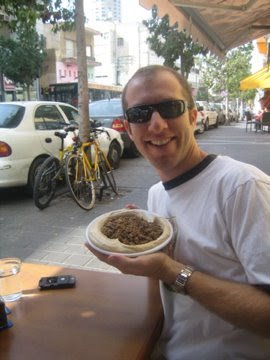 Does it get better than this? Don’t worry, I already know the answer.

11. I love the impossible-to-predict playlist of Galgalatz. “Ok, Galgalatz, I dare you to play ‘Yerushalayim shel Zahav’ followed by ‘Smells Like Teen Spirit’……….what do you mean you just played it?”
12. I love how when it rains, people celebrate like we just won the gold medal in basketball.
13. I love that when we win a gold medal, we celebrate like a people who take pride in every individual award won by our tiny country.
14. I love the effectiveness of El Al security. All together now: if El Al doesn’t do it, NO ONE SHOULD DO IT. Sorry, Delta, I’m not taking my pants off.
15. I love that while in America, Esti Ginzburg would be an 80 year old grandmother in South Florida, yet here she’s a hottie patottie Sports Illustrated model who also lights the Chanukkah candles.
16. I love the chassid who protested the sale of chametz by wearing only a strategically placed sock. Apparently the Red Hot Chili Peppers are huge in Mea Shearim. (And, no, you’re not getting a picture.)
17. I love the number of people who hit the social networking sites like Twitter and Facebook to defend Israel when it’s being blasted in the international media.
18. I love that the popular kids game Simon Says is not in fact called Shimon Omer as Americans think but rather Herzl Amar (Herzl Said).
19. I love Friday in Tel Aviv and the incredible energy on the streets, in coffee shops, and oh yes….at the beach.
20. I love hanging out at Chof Bograshov in Tel Aviv and then seeing the same beach hours later in “You Don’t Mess with the Zohan.”
21. I love not so much that my friends visit from the States and get so excited to be in Israel that they practically lose control of their bowels, but more that I can secretly smile and and think to myself, “Yeah, I live here.”
22. I love Rosh Hashana dinner with my friends and their family when they feed me enough to nourish a small army.
23. I love when this unathletic North American Jew meets massive wood-chopping Israeli gevers. This dude’s arms were so big, they required arnona payments.

24. I love drinking tea with only nana in it. Teabag? Who needs it?
25. I love that Israeli tour guides know everything about every square inch of this country. If Moshe Rabeinu went #2 on this rock, you can be sure that your guide learned it.
26. I love the uniqueness of the Israeli job search. Even if you don’t get the position you’ve applied for, there is roughly a 57% chance that you’ll be offered a date with the CEO’s daughter.
27. I love that there’s free wireless internet everywhere, especially in Ben-Gurion Airport. Eat your heart out, Starbucks.
28. I love that we put Shimon Peres on a wedding dress. 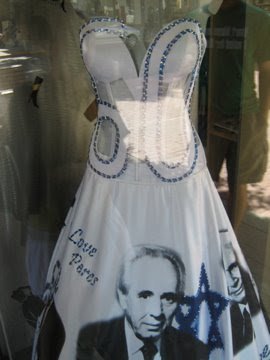 I don’t even have a joke here.

29. I love that my friend overheard his bus driver telling Talmudic stories with morals and relating them to current events. Only in Israel.
30. I love how lifeguards on the beach turn into Jewish/Polish mothers when they freak out and yell in Hebrew “please please please, I urge you to come closer to the beach!”
31. I love that my cab driver offered me a peach and that I accepted it. That will happen in America when falafel balls fly.
32. I love the Israelis who take such pride in their country that they ask tourists, “You like Israel? Why you not live here???” When you’ve got Zionism, who needs linking verbs?
33. I love that this country is roughly the size of a parking spot yet is one of the most innovative producers of technology on the planet. Boycott us if you’d like, world. Just please return your cell phones, thanks. (And I’d like an iPhone while you’re at it.)
34. I love that the cable companies are named for English words, causing the inevitable awkward statement, “I’m waiting at home for the HOT guy to come.”
35. I love sachlab in the winter.
36. I love that the vendors at the shuk sell their product as if their lives depend on it and like they just downed four cups of coffee. “AGVANIOOOOOOOOT! SHTAY SHEKEL!!!!!!!!” Do they know they’re selling tomatoes? You bet they do.
37. I love that a two year old can wet the bed but still sing “Avadim hayinu” for Pesach. Goooooo, Jewish education!

38. I love the brave 18 year-olds who serve to defend this country. Do I even need to tell you what I was doing at that age? Let’s just say it rhymes with “Meroxing body parts.” Apologies to the administrative staff at Texas Hillel.
39. I love how the fruit shakes here contain the most obscure fruits in the history of the world. “Watch this….hey, can I get a shake with Abraham’s desert star citrus fruit, but the one without the seeds that only grows in the Western Negev? (pause) YOU HAVE IT???”
40. I love how the street names aren’t Main, Elm, and MLK, but Hillel, Shamai, and Herzl. (Do you think Theodore had any idea that 100 years after his death, Tel Avivim would be selling furniture on his street? Hey, Ben-Yehudah, thanks for reviving our language. To show our gratitude, we’ve decided to give you a pedestrian mall where teenagers frolic and buy their name on a grain of rice.)
41. I love how Hebrew makes so much sense. A store with everything you need? Kol-bo. Delicious treat with cream in it? Crem-bo. We need more words like this. Bat Yam? The ars-bo! (Just kidding, Bat Yam, you know I love you.)
42. I love how Israelis will drink coffee even when it’s 80,000 degrees outside. “We ahr five meen-utes from deh sun? B’sedeeeer! Hafuch gadol!”
43. I love words like “teetchadesh” that neither exist nor make sense in the English language”. “Wow, cool shirt! Enjoy using your new thing!” Nice try.
44. I love the distant cousin of the shuk vendor, the guy outside the Arlozorov train station selling “baigeles”. Apparently he gets paid to say baigele 568 times per minute without taking a breath. “BAIGELE BAIGELE BAIGELE!!!”
45. I love laughing when an Israeli turns to his friend and asks the question “mah ata dafuk?” (are you crazy?) The answer to that question is absolutely, positively, always yes. Whatever the guy just did, it was definitely dafuk.
46. I love that Agadir Burger Bar not only allows you to order a burger with just about anything on it but also publishes a calendar showcasing their waitresses. 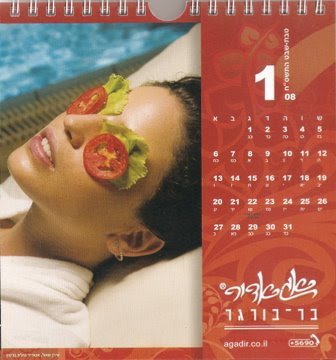 All right, so maybe it’s a little weird…

47. I love that I just saw someone tell their pet “shev” which he of course did. He’s a dog and he knows Hebrew. Between this and the two-year old singing Passover songs, does it get any better?
48. I love that you can pay for everything in tashlumim, monthly installments. One of these days, I’m going to try this with an Egged bus driver just to watch his head spin.
49. I love that I went to a Guns N’ Roses tribute concert in Jerusalem and not only did the singer speak to the crowd in Hebrew, when he sang he actually sounded just like Axl Rose. “Oh oh oh oooooooh, sweet child of miiiine! Bruchim habaim!”
50. I love that Israel got its first Apple store this past year. Yeah, baby.
51. I love how people have no qualms about giving you a ride to the airport even if it’s three in the morning and their wife is in labor.
52. I love the support that experienced olim (immigrants) give to prospective olim, answering questions and emails even if they’ve never met before.
53. I love flying into Israel and going through the “Israeli passport” line. (On a related note, I also derive some guilty pleasure watching the tourists lining up in the very lengthy “Foreign Passport” line as I quickly waltz on through. Does that make me a bad person?)
54. I love how on Rosh Hashana, the car radio display wished me a “shana tovah”. I don’t care what planet you’re from, that’s awesome.
55. I love the beautiful hills of Haifa which nevertheless caused me extreme confusion upon entering an elevator from ground level. “What do you mean we’re on the 9th floor?”
56. I love watching the Super Bowl until 5 AM with the guys. When you work that hard for it, you enjoy it that much more.
57. I love the superhuman Israeli hearing which allows them to pick up the “beep beep beep” of the news even while someone is using a jackhammer three feet away.
58. I love how Google redirects you to the Israeli version of the site. The first time it happened, I looked behind me and thought, “WHOA!!! How do they know???”
59. I love the powerful emotion I feel during the Yom Hazikaron siren which you can only experience in Israel. Was anyone else caught off guard the first time they heard the siren? Seriously, I thought aliens were coming to eat my brain.
60. I love Yom Ha’atzmaut which is apparently Hebrew for “go to the park and eat a cow.”
61. I love that I’ve had this once-in-a-lifetime experience and that it’s not over yet.