Posted at 3:54am on Mar 3, 2009 in Comedy, I Love This Place, Israelis Make Me Laugh, That Thing That Pays the Bills by Benji Lovitt 0 Comments

Ahhhh…..Shabbat, the day of rest. Or cleaning rooms and doing expense reports. One of the two. How about the day of catching up on writing? So once upon a time, I went to America for a comedy tour about life in Israel. Oops, North America. (Sorry, Canada.)

Definitely an odd week. B’kitzur, I was in six cities in six days with no time to actually do anything aside from fly, eat, sleep (just a little), and see some friends. And holy falafel balls, did I eat. How many sausage, egg, and cheeses on an everything bagel can one man eat at the airport? At least three in as many days. B’ima sheli, what’s up with a fruit cup costing $400 in that country? Calgon (and Machaneh Yehuda), take me away!

Remember this commercial?
Who the hell owns a bathroom like this? Where is she, ancient Rome?

Mexican food-check. Late night Jack in the Box (dollar chicken sandwich and two tacos for ninety nine cents)-check. West Coast In-and-Out Burger? B’ima sheli, that is *$%&ing good! I’m not even kidding, I don’t think I saw a vegetable for an entire week, and a small side of lettuce and tomatoes for my fajitas does not count. While my taste buds were happy with me, I am sure my heart was not. I guess I’ll take my Aroma salads and life expectancy over Jack in the Crack. (That’s probably another subtle sign of how healthy food is….the nicknames that the eating populace assign to their, ahem, “restaurants”. Jack in the Crack, Taco Hell….what else is there? Nobody’s coming up with names for Aroma.) 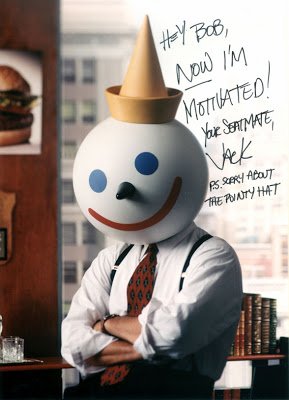 For a guy who eats like crap, he sure does dress nicely.

The shows all went great. It was great to see my friends who came out and a lot of fun to speak with people who are thinking about coming to Israel to visit or to make aliyah. I couldn’t say who the average audience member was but they at least seemed to understand what the heck I was talking about based on their laughter. I loved when someone would walk up afterwards and say “Omig-d, my boyfriend is Israeli and HE TOTALLY DOES _________.” Which meant that she really GOT it.

I often wondered, did Joe Audience Member REALLY get what I was talking about? A couple of times, somebody was laughing hard only to reveal that they hadn’t been to Israel. Wow, that was interesting to me. If you thought that was funny, you should spend some time here… Have a few pedestrians casually walk in front of your car and the driving references get that much better. But the shlichim who hosted me in their cities were very satisfied which is exciting and a big deal. As for what this all means….well, you’ll have to stay tuned.

More life updates coming soon….spring is on its ways and the weather’s gorgeous. And you know what that means….RETURN OF THE T-SHIRTS!